Most people know that the English longbowmen were a major reason the English armies had such success against the French during the Hundred Years War. The composition of the French armies was definitely dominated by the French men-at-arms with their heavy armor, melee combat skill, and impetuous disregard for the chain of command.

At Crecy, the French men-at-arms attacked the English army while mounted. The mounted knights impulsively charged through their own crossbowmen. They galloped forward and were mown down by the English longbow fire. While the knights were heavily armored, many of their horses were not and the English archers learned to aim at the mounts. I can only imagine the chaos as horses collapsed, dumping their riders, only to have more mounted knights ride over or collide with the casualties. It must have been like a giant traffic collision in front of the archers' positions.

One would assume the French learned from the experience of Crecy. At Poitiers, the French were dismounted and formed into divisions aligned in column, one behind the other. Most of this change was an effort to control the impetuous elan of the knights. If they were dismounted, the men-at-arms couldn't move as quickly. If you placed them in column, the warriors in the rear were forced to moderate their pace because they were blocked by the division in front of them. For various reasons, mostly due to the strong defensive position of the English, the French were unsuccessful at Poitiers.

For the Agincourt campaign, the leaders of the French army had a solid plan. The dismounted MAA would go after the English MAA. The French set aside a specially selected mounted division that would target the English longbowmen. Only the knights with the best armor and the best-armored horses were chosen for this mounted division.

Unfortunately for the French, Henry V captured a few prisoners who told the English that the French intended to send their mounted contingent after the archers. Henry instructed his longbowmen to sharpen six foot stakes from the woods and march with them on the campaign. During the battle of Agincourt, the archers hammered these stakes into the ground in front of their positions to increase the strength of their defenses.

In Piquet Band of Brothers, the stakes only affect mounted units. A mounted unit has to pay an extra move to get past the stakes. Also, archers behind the stakes can't be intimidated by Cavalry Morale Challenges from the French mounted knights.

Agincourt was apparently one of the first battles where the English used these movable defensive obstacles, so it would be nice to represent them on the battlefield. It's great to tell the guys, "Okay, pretend your archers have stakes.", but it's much more scary when you actually see all of those sharp points staring at you. 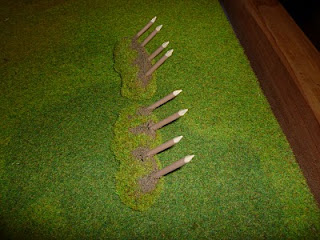 I found a box of nails at Lowes with tips that looked like they were sharpened. I used a box of Sculpey I bought at Michaels and pushed the nails through the sculpey. Bake them at low heat in the oven, prime, paint, and flock and there you have it. Cheap, easy to make, stakes that look good and are useful for a variety of defensive purposes.

For some guys, the oven baking might be a problem, but I have to admit, I live in the kind of house where my mother-in-law doesn't even blink when she sees me sticking clay and nails in the oven. She just assumes it's some new wargaming project. 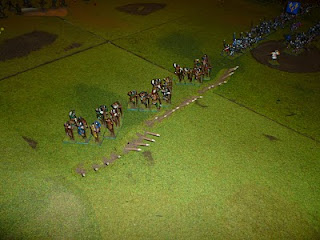 Well, I haven't posted in a while because I've been painting like a maniac, trying to get my French HYW army ready for the Agincourt game at our local convention. Luckily, I've infected a few friends with the "medieval" wargaming bug and their painting efforts have taken some of the pressure off of me.

I do realize that if you don't update blogs regularly, people will stop looking at them. So, here you go.

Here are some pictures of the knights and leaders I've painted for the battle. Unfortunately, I never seem to have time to take pictures in daylight, so the lighting isn't the best. 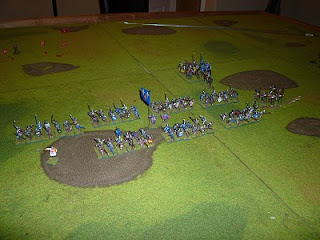 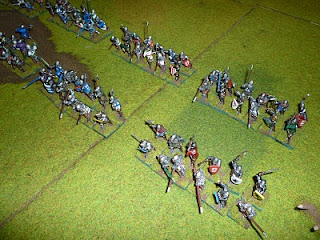 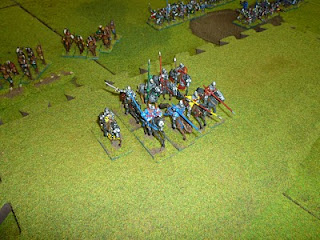 (ABOVE) Here's my unit of Perry mounted knights. 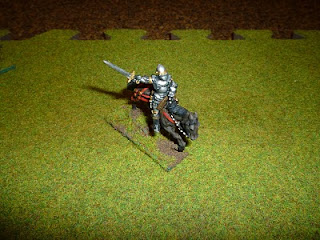 (ABOVE) This is the Comte de Brabant. He was the "commander" of one of the ill-fated mounted wings of the French army. 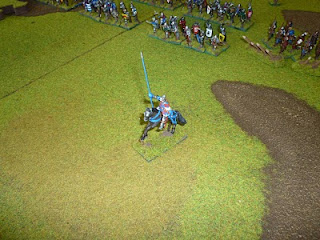 (ABOVE) Louis, the Count de Vendome. Another heavy hitter who fought at Agincourt. I believe his branch of the Bourbon line eventually succeeded to the throne of France. 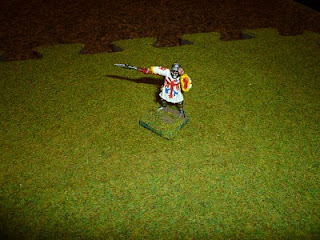 (ABOVE) Marshal Boucicaut, one of the French leaders at Agincourt. He was knighted at 16. He was a warrior for 43 years and was considered to be a shining example of French chivalry. Boucicaut was captured at Agincourt and died in captivity in England six years later at the age of 55. His attempts to ransom himself were rebuffed by Henry V who was probably smart enough to realize that letting this old warhorse return to France would only cause him trouble down the line. 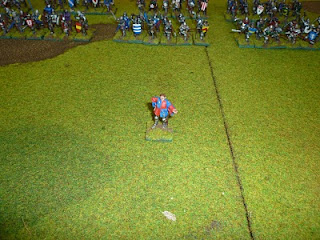 (ABOVE) Charles de Albret, Constable of France. Charles was a strong ally of the French Armangac party. He was nominally the overall commander of the French army, but he most likely lost control over the army once the battle began. He wanted to wait out the English, but once the English began firing on the French knights, there was little he could do to stop the attack. He was killed at Agincourt. 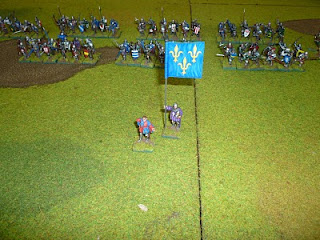 (ABOVE) And here is the Constable with his standard bearer. I like how the standard bearer is holding Charles' helmet. He's probably like, "Yeah, Charles, I'd love to hold your freaking helmet for you. Maybe you didn't notice I'm already holding your f$%&%king gigantic banner standard already. No problem." I probably wouldn't have lasted very long in medieval France. 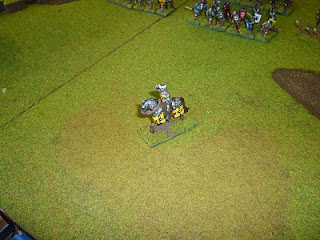 (ABOVE) Count de Fauquembergues. Despite the fact that most of the men-at-arms in the third division of the French army headed for home when they saw the fate of the first two divisions, Fauquembergues led the final charge of the remainder of that third division against the English. And guess what? He died on the battlefield. Very chivalrous. 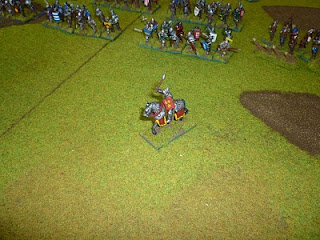 (ABOVE) Another mounted knight. No one in particular, but he probably fled the battlefield in panic at some point.
Posted by Castigator at 4:18 AM 1 comment: