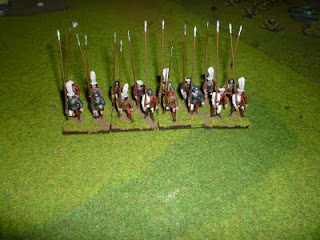 I purchased the Perry Miniatures plastic mercenaries box, but I waited a few weeks for the metal Swiss heads set to come out. The Swiss heads give some variations (feather, caps, bonnets) that are suitable for representing the Swiss pike troops and missile troops who battled against Charles the Bold and the Holy Roman Emperor in the late 15th century. They painted up nicely and the plastic pikes are surprisingly flexible and durable. 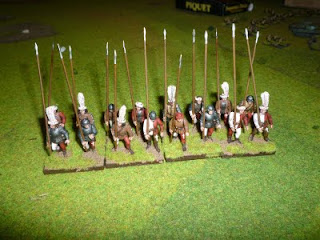 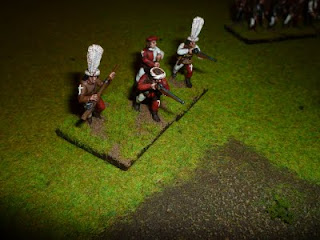 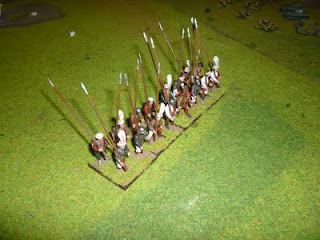 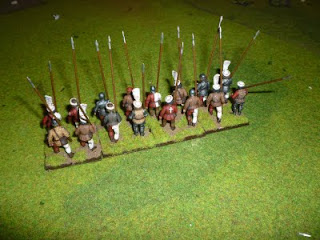 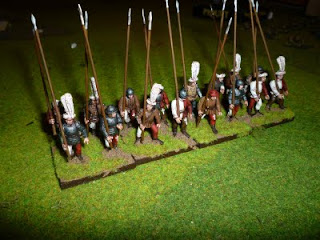 This post is for Greg to prove to him that I'm still painting for our medieval project. Here are some pictures of some of the newest 28mm Perry Miniatures Hundred Years War command stands I've been painting for my Piquet: Band of Brothers games.

In Band of Brothers, the sub-commanders and commanders fight in the ranks, like real men. We're trying out a new house rule that reflects the household troops that would fight alongside these high-ranking nobles. The command stands actually form up with the unit they are attached to and count as an extra stand for stand difference modifiers. A four stand unit with a commander attached to it would count as a five stand unit.

We'll see how that works. It might be too much of an advantage, but it doesn't hurt to try it out.

I took a command figure from the Perry personality set and matched them up with two miniatures from the Perry men-at-arms and command packs. The flags are from Maverick Models. The owner was nice enough to design a flag for Thomas Erpingham for me. He also can size the flags to suit your needs. Great service.

I'm still using the idea I stole from James Roach for removable flags. Each flag is wrapped around a small tube so I can remove them for travel and when the commanders need to represent different armies and nobles. 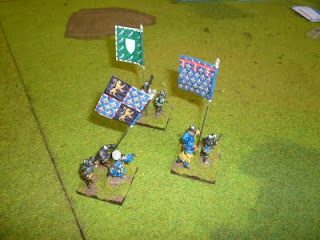 The command figures are: 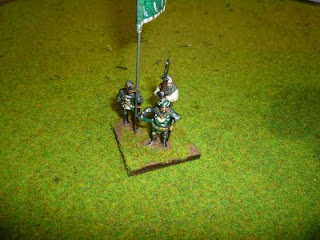 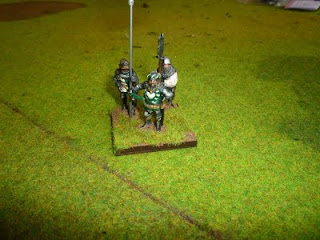 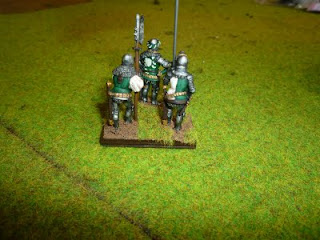 The Count d'Eu, captured at Agincourt. But he looks pretty! The Perry's did a great job of sculpting his heraldry: 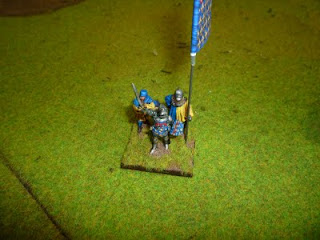 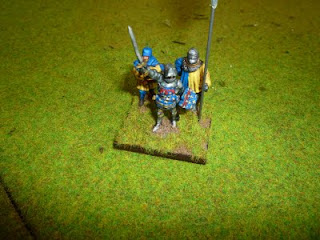 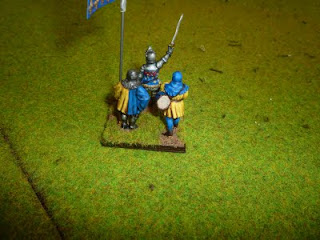 Anthony, the Duke of Brabant, who arrived late to the battle of Agincourt, rushed into combat at Agincourt. In his hurry, he wore improvised armor and a surcoat made of a trumpeter's flag. He was captured and executed when Henry V gave the order to kill the English captives. He most likely died because no one recognized his value as a hostage without his heraldry. In my games, he fights dressed to the nines: 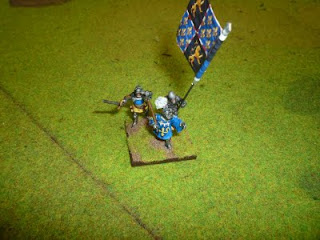 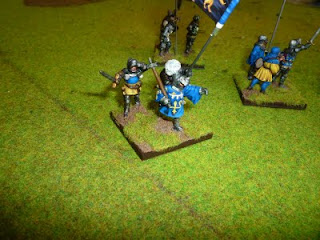 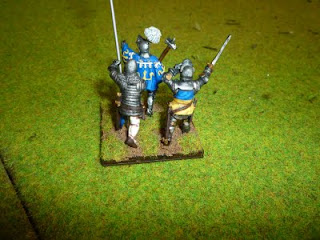 After a few games of Field of Battle WW2 (FOBWW2), I decided to embark on a new WW2 project using the FOBWW2 rules. The smallest unit in the game is a company. Commands are battalions and brigades. The rules make it easily possible to fight a division versus a division.
Each day lasts 3 turns (AM, PM, and Night).

After re-reading Glantz's Kursk book, I realized much of the action described in the book could be recreated with the FOBWW2 rules. For the first Kursk project, I selected a recreation of 1st SS Panzergrenadier Division LAH's attempt to seize Prokhorovka. 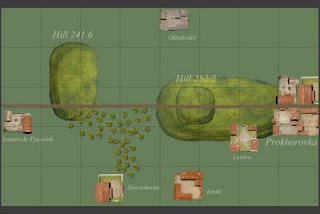 From 10 July 1943 to 15 July 1943, the LAH Division attempted to fight its way into Prokhorovka. It was opposed by a tremendous quantity of Soviet armor, infantry, airborne troops, and entrenched AT guns. The Germans start on the left side of the table and immediately have to seize Hill 241.6 right in front of them. By the end of the scenario, SSLAH Division has to have seized all four town sections of Prokhorovka on the right board edge to win the game.

One of my fellow Piqueters, Jed, agreed to participate in this project with me. I already had a decent collection of 10mm American and German troops, but no Soviets. My calculations have shown me that we will need to paint up the entire SS LAH Division as well as a Soviet Guards Airborne Division, a Soviet Tank Corps, a few motorized rifle brigades, and several AT artillery, assault gun, and heavy tank regiments. I currently have enough painted Germans to field half of what we will need.

I have a lot of Pendraken infantry and vehicles. I also have approximately 30 pre-painted German 1/144 tanks. I ordered some samples from Pithead and I was happy with how closely the Pithead vehicles matched up with the plastic armor. I also recently purchased 48! 1/144 pre-painted plastic T-34's at Historicon, so that should help the painting chore list also: 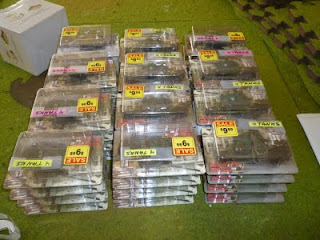 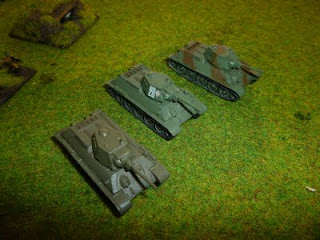 I sat down and painted 10 Pithead Soviet infantry stands to see how they would turn out. With 10 poses per bag, I was happy with the results. After 2 hours of painting, only 90 stands left to go!: 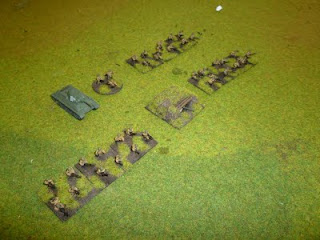 The tank is an un-based plastic T-34. We'll base and touch them up.

The middle bunker is an AT gun bunker I made for this project out of Sculpey and toothpicks. The Soviet AT fortifications really wore down the Germans throughout this battle. I thought it turned out pretty well and I have some ideas for improving on this test model. I need to make 7 more and I didn't feel like buying a bunch of 10mm AT guns if I could make them myself. 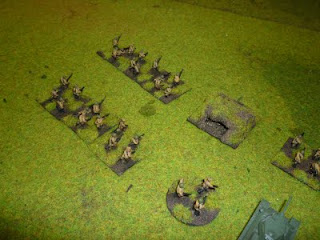 The circle stand is a Soviet battalion command stand. The Pithead infantry looks really nice and I'm very happy with them. They also make tank riders we can put on out T-34's. 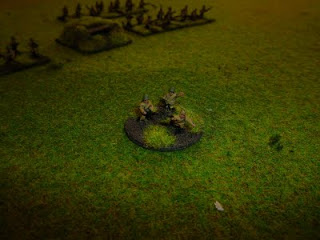 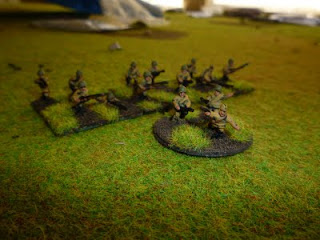 Here are more pictures of my awesome AT bunker: 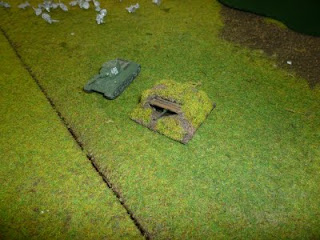 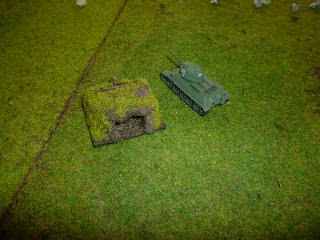