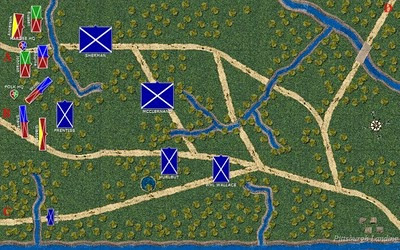 "Tonight we will water our horses in the Tennessee River."
- Confederate General A.S. Johnston
The battle of Shiloh was the first major battle fought in the western theater of the American Civil War. Up to this point, the Union had enjoyed success at Fort Donelson and in the states of Missouri, Kentucky and Tennessee.

The senior Confederate commander in the West, Albert Sidney (A.S.) Johnston was considered one of the best officers to enter the war from the pre-war U.S. Army. Johnston organized a concentration of forces that consolidated troops from all of the surrounding states. This gave him local numerical superiority over the relatively scattered Union forces in the area.

Union General U.S. Grant's army was camped on the west bank of the Tennessee River at Pittsburg Landing. Grant was waiting for the arrival of General Buell's Army of the Ohio which was expected any day. Grant had one division, commanded by Lew Wallace, stationed at Crump's Landing downriver from the rest of the army. The Union commanders had no idea that Johnston had massed his forces and was approaching Grant, intent on destroying him against the Tennessee River.

The Confederates moved through the thick terrain and formed battle lines near the Union positions. Early on the morning of April 6, at approximately 6 a.m., Union pickets aggressively pushed against the growing swarms of Confederate skirmishers stalking the woods outside their camps and suddenly encountered the gray and butternut lines sweeping toward them through the trees.

The Union forces were in their camps when their pickets fled back to them, pursued closely by the Confederate brigades. The howling Rebels drove the surprised Union forces back toward Pittsburg Landing. Union General Prentiss managed to organize stiff resistance near Bloody Pond and the Confederate assault began to focus on reducing that resistance. The musket and artillery fire became so fierce that the area became known as "The Hornet's Nest". This same heavy fire also claimed the life of the Confederates' commander, A.S. Johnston.

Once the Hornet's Nest was overcome, the Confederates continued their drive to capture Pittsburg Landing, but too much time had been lost reducing the strong position. Grant arrived on the battlefield and organized a final line of defense that repulsed the exhausted Confederates with the assistance of reserve artillery and Union gunboats from the river. Late in the evening, Lew Wallace's division arrived after a confused day-long march and counter-march over country roads. During the night, Buell's army arrived and was ferried across the Tennessee River. The Confederates had lost their opportunity to seize victory. Outnumbered and exhausted, they were driven back across the battlefield the next day.

The scenario is designed for grand tactical scale Hallowed Ground, a Piquet supplement. At this scale, the units are brigades and artillery battalions. The commands are corps and divisions.

"..the enemy was found utterly unprepared, many being surprised and captured in their tents, and others, though on the outside, in costumes better fitted to the bedchamber than to the battle-field."
- Confederate General Braxton Bragg
Surprise Attack - The Confederates achieved a remarkable degree of strategic surprise at this battle. Despite many warnings and clues that the Confederate forces were nearby in large numbers, the Union troops were totally unprepared for the sudden appearance of the Confederate attack. The Union forces were still in their camps when the battle opened and they rushed to form battle lines to defend themselves.

The Union divisions all start the battle in their camps with their division commanders and disordered.

The Hornet's Nest - A special Stratagem card should be added to the Union Sequence Deck in Turn 2: "Hornet's Nest". Once flipped, this card is removed from the Deck and the Union division closest to the Confederates' board edge makes a last stand. In the case of a tie, roll for the affected division. The brigades of this division immediately rally. From that point on, they can roll two dice versus all morale challenges and pick the highest die. Unfortunately, these brigades defend their positions and cannot make any voluntary retreats or other movement away from Confederate units. Maneuvers are permitted. If they rout, they surrender instead and are removed as if destroyed.

Union Gunboats - The naval guns of the Union gunboats USS Lexington and USS Tyler in the Tennessee River did have some impact on the Confederates as they approached Pittsburg Landing. These gunboats are represented by two heavy regular smoothbore battalions that measure range from the river's edge next to the Landing. They fire and reload just like normal artillery, but they can't be attacked.

Beauregard's Plan - Confederate General PGT Beauregard deployed the corps of the Confederate army in a column of lines. This caused a great deal of confusion during the battle because brigades from different corps were posted behind each other and as the battle developed, brigades from different corps were forced to fight alongside and support each other. This breakdown of the corps command structure was difficult for the Confederate corps commanders to overcome.

CinC A.S. Johnston can rally units without this additional penalty but if he rallies units, he assumes personal risk at a rate of +3 per rally attempt. This accumulated personal risk is checked on each Officer Check card vs. a d20. Once the check is passed, the personal risk returns to 0.

I determine the armament of my infantry units when I make the Troop Quality Check for each unit. I roll a d10 for each unit and if I roll a 5 or less (Confederates) or a 8 or less (Union) the unit is armed with rifled muskets.

The battle is a smaller grand tactical scale battle and I recommend using one Sequence Deck per side. The Union deck should be Poor until Grant appears when it becomes Skilled. The Confederate deck should be Average. 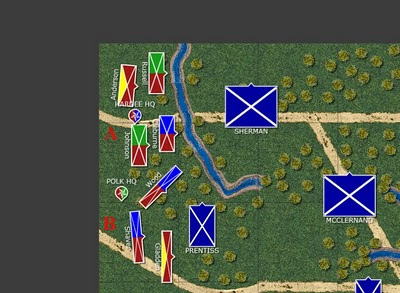 The creeks and woods are all Class II. Both of them block LOS.

The creeks in this area were all in wooded ravines that fed into the larger creeks and the river. When a brigade pays the Class II cost for the creek, it is considered to be in the ravine. A unit can only have LOS into a creek ravine if it is adjacent to the creek. A unit defending either side of a creek from a unit inside the creek ravine is in a superior position.

The roads on the map were very rough and give no bonuses to movement.

The Union player has to really choose between trading time for space. Union brigades need to be rallied, but giving up too much ground can hand Pittsburg Landing to the Confederates. The Hornet's Nest can be a blessing or a curse. It might delay the Confederate attack or it might needlessly sacrifice Union units that are needed to defend the landing.

The Confederate player has to push, push, push! Take advantage of the initial disorder of the surprised Union divisions and destroy as many as possible. If you give it time to breathe, the Union army will recover, stop, and destroy you.

If the Confederates capture Pittsburg Landing, the Union must give them 15 morale chips. 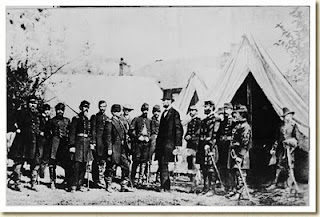 If you haven't seen the game in action, feel free to check out the Battle Reports and Scenario tags on the blog.

Feel free to reserve a spot in the game by emailing me or commenting on this article. Even if you'd just like to see Piquet in action or observe the game, stop by and check it out. Minor kibitzing is completely acceptable as long as it doesn't prevent me from giving annoying and unsolicited advice to the poor players.

ALSO: If you want to play the Union, I owe you a drink at the bar, but there can be absolutely no whining or crying about the following topics:

Posted by Castigator at 8:24 PM No comments: