Greg and I ran the Kursk: Drive on Prokhorovka scenario at our local gaming convention this past weekend.  It really is a huge scenario and even with an early ending, it took us at least 9 hours to play it through.  When we play, the game goes much more quickly, but newer players always play a bit more slowly than experienced ones.

The Field of Battle : WW2 (FOBWW2) rules aren't that complicated, but it did take a few of the players a bit of time to get the hang of them.

The battle started off very badly for the attacking Germans.  An early end to the first two turns meant that on the morning of 11 July 1943, the Germans had not yet seized any of their first turn objectives and even Hill 241.6 was still in Soviet hands.


On the morning of 11 July 1943, the Germans threw their forces into the attack.  Both panzer grenadier regiments moved up the right flank and became embroiled in a vicious fire fight around the town of Storozhevoe.  Meanwhile the panzer regiment advanced up the left flank, encountering heavy minefields as they went. 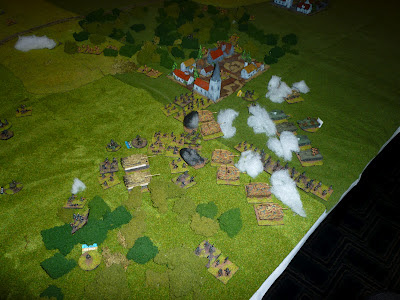 The Soviet players were very happy with their progress so far, so they decided to order one of the airborne brigades to move out of its defensive positions and move into the woods surrounding Storozhevoe on the German left flank.  These airborne troops would make it much more difficult fr the German panzer grenadiers to capture the town.  The 58th Motorized Rifle Brigade was tasked with filling the gap left by the airborne troops.

Unfortunately, the 58th MRB suffered heavy casualties soon after it entered combat.  It wasn't able to dig in and the German armored forces chewed up the lightly-equipped Soviet infantry.  The brigade broke and ran.

The KV-1's of the Soviet 57th Heavy Tank Regiment were destroyed by the Panzer IV's of the 1st SS Pz Regiment and soon the Soviets were left without any armor support on the table.  The Soviets began to wish they had left the airborne regiment back in its defensive positions.

After vicious fighting and several unsuccessful attempts to close assault Storozhevoe, the German panzer grenadiers finally managed to blast the Soviets out of the town.  Even the airborne troops in the woods had suffered heavy casualties, and with the flip of a Soviet Morale card, both units defending the area failed their morale tests and surrendered.  The Germans entered the ruined town and then prepared to swing further along the right flank toward Prokhorovka, the final objective.

Luckily, a few cards earlier, we had ordered an infantry battalion to move back into Prokhorovka and help defend it.  Otherwise, the objective would have been completely unprotected.


As the night turn arrived, we took a break and I set up the massive reinforcements the Soviets would receive during the night.  These armored units represented the main strength of the 5th Guards Tank Army.  I just needed to pull a Move card for them to arrive in Prokhorovka and pound the Germans.


The night ended quickly and we started off the 12 July AM turn with a massive artillery bombardment of the Germans.  This bombardment took 9 strength points off of the German forces and left them with only 6 morale points to finish the battle.  The Soviet players felt pretty confident they could claim those morale points when their large reserves entered the table.

The Germans won the initiative and moved closer to Prokhorovka, dishing out heavy casualties to the few Soviet infantry units remaining on the table.  The 1st SS Panzer Regiment was stopped in front of the Brick Factory by grim infantrymen and attached AT guns.  The 2nd Panzer Grenadier Regiment began rapidly pushing up the right flank and was nearing the defenders of Prokhorovka.  Would 3 infantry companies be able to hold them off?

Apparently not.  When the Soviets took their turn with initiative, they were unable to get a Move card to bring their reserves onto the table.  Even worse, they pulled a Morale card and failed every morale check on the table.  The defenders of Prokhorovka saw the panzer grenadiers coming and headed for the rear.

With 5 more cards to flip, the Soviets flipped through their deck, looking for that precious Move card.  With 2 cards to go, they pulled a Lull card!!!  The Germans seized the initiative and had one chance to play a card.  Greg flipped a card and it was the one card the Germans needed: Move 1 Command.  There was much high-fiving, screaming and cursing.

One of the German panzer grenadier battalions rolled an Even Triple Move roll, raced into Prokhorovka and occupied all 4 town sections.  Game over.  The next Soviet card in the deck?  You guessed it.  The Move card........

So it was an exciting finish.  Greg almost called the game after the disastrous start for the Germans, but the Germans played a great middle game and inflicted some tremendous casualties on the Soviet infantry.  I doubt the Germans would have survived the Soviet counterattack, but the Soviets just couldn't hold on long enough to find out.

Prokhorovka is a giant scenario and as I studied the battle, it turned out to be much larger than I thought it would be.  For my future plans, I intend to design a few smaller scenarios based around the Soviet operations at Kharkov in 1942.  These scenarios should be considerably smaller than Prokhorovka.  I'm also painting up some winter boards so I can run games that recreate Operation Mars and the Korsun Pocket.

I've also decided to just use 1 stand units for FOBWW2.  The 2 stand units look better, but the footprint of the units is smaller when there is only 1 stand and it allows more room for maneuver  Also, players became confused when told the unit has 2 stands, but 3 strength points.  It will also allow me to repaint some of my existing armor units as winter units.
Posted by Castigator at 6:30 AM 5 comments: