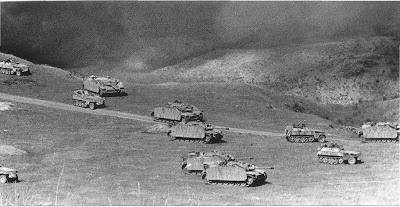 This will be an ongoing record of my first play test of my Prokhorovka (Kursk) scenario using the Field of Battle: WW2 (FOBWW2) rules from Piquet.  The units are companies, the commands are battalions and brigades, and 3 turns (AM, PM, and Night) make up a complete day of fighting.

This battle report is for Turn 4, the PM turn of July 11, 1943.  If you want to get more information on this battle and the scenario, search this blog for other articles with the same tags. 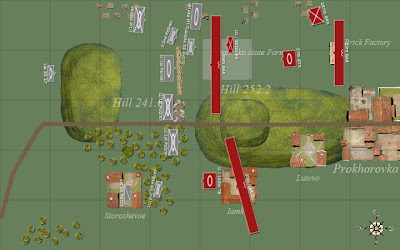 The Germans fired to great effect in the beginning of the turn.  They hoped the Soviets would fail a few morale checks with their damaged brigades, but after no Morale cards appeared, the Germans focused on destroying the remaining Soviet companies defending the Oktiabrskii State Farm on the the northern side of the table.

The Soviets used a Move card to occupy one of the Psel River villages with a Guards infantry battalion.  The Germans then pulled another Move 1 Command card and managed to seize the Oktiabrskii State farm after heavy fire devastated the defending units.  The Germans appeared to be in great position to advance and gain ground before nightfall, but a tied Initiative roll ended the turn early!  It must have been those damn minefields.  As night fell on July 11, the Germans were in practically the same positions as their historical counterparts. 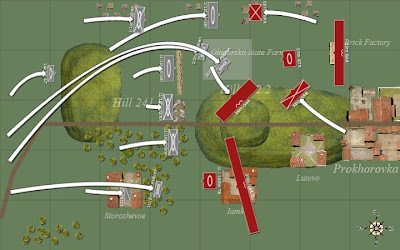 The Germans plan to fortify their defenses during the Night turn.  They've received word from II SS Panzer Corps that major Soviet armored assets have been committed to the battle.  5th Guards Tank Army will be arriving during the night with the 29th Tank Corps and the 18th Tank Corps. 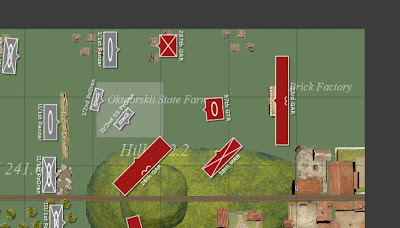 The good news is that both the Das Reich and Totenkopf SS Divisions made progress on the flanks and advanced a foot.  Great job guys!  Now, please try and catch up.


(BELOW) Infantry of the 287 Guards Rifle Regiment occupy Prelestnoe on the Psel River. 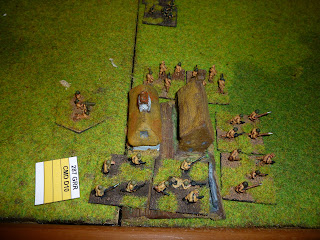 (BELOW)  These are my Heavy Weapons markers for the Soviet infantry.  These reflect the heavy weapons in each infantry company.  They can be assigned to an attack to give an UP1 modifier to combat. 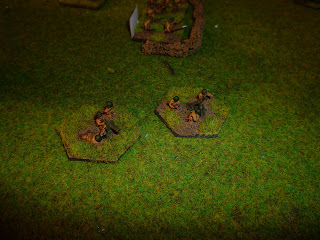 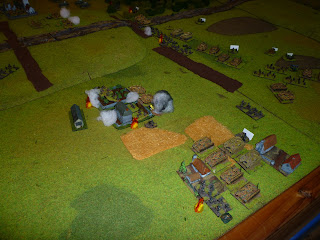 (BELOW)  The Soviet defense is looking a little thin from this viewpoint from behind the northern defenses.  5-6 infantry battalions and a company of KV-1's.  5th Guards Tank Army is coming just in time. 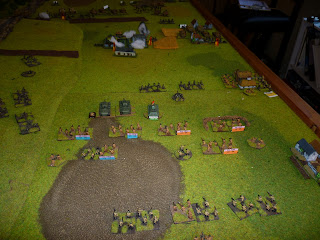 (BELOW)  Staging area for the two Tank Corps of the 5th Guards Tank Army.  That's a lot of T-34's!!!  This isn't their actual position on the table.  I just lined them up to make sure I had the tanks I needed for the Soviet counterattack. 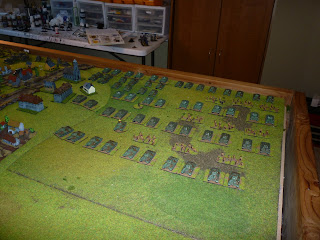 (BELOW)  Here are the Marder III companies of the 1st SS AT battalion.  10mm miniatures by Pithead. 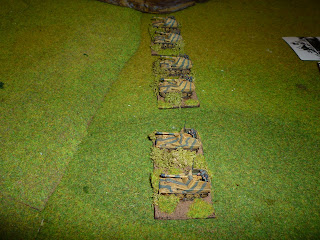