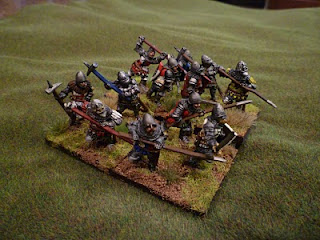 Good basing can go a long way to making units look great on the table. We've all seen nicely painted figures based on bases that don't look as good as the figures. For many years, I focused too much on the miniatures and I saw the bases as a necessary evil that just needed to match the table and made the figures easier to move around.

I recently decided to re-base my Hundred Years War army. When I first started painting the army, I wanted to have my figures based individually so I could play Piquet and still use them to play Warhammer Ancient Battles (WAB). I put magnets in the individual bases and used larger, green metal bases to create the bases for my Piquet games. Unfortunately, the metal bases really looked like crap on the wargaming table and the figures would shift around on them.

I chose to convert to a 40mm/2" square base system. I used the 3mm thick wooden Litko bases. The basing was largely decided by what would fit on a base:
This basing will make the figures easier to move and allowed me to get rid of the ugly metal bases. The 40mm square bases can work for a lot of different game systems. It also still technically can work for WAB with some adjustments, but my friend Adam, who plays WAB, interpreted my re-basing as a final divorce from the WAB system. Maybe. Maybe not.

Initially, I plan on using 3 bases for my Piquet units. As my army grows, I'll increase the unit size to 4 bases each. The bases will also allow me to model the longbowmen's chevron formation better than my old basing.

Since I planned on re-basing the figures anyway, I thought I might put a little more work into them. After seeing the great bases on James' blog, I thought I would try the Silflor grass tufts to add some vegetation and color to my bases. I ordered three shades of the tufts. They sell sample packs of them at Scenic Express for $5.99 each. They look great. I initially didn't like the bright green ones, but they actually show up much better from a distance than the more natural shades which tend to blend into the ground cover. 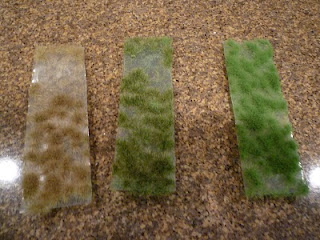 My basing process is:
I think the new bases turned out nicely. 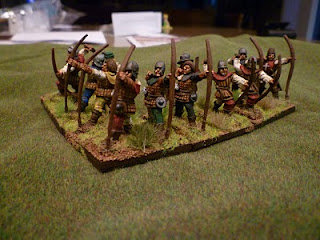 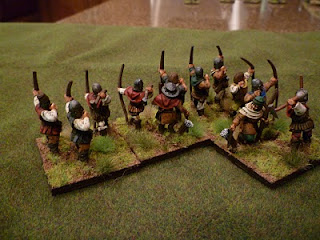 (ABOVE) My longbow unit in chevron formation. Old Glory figures with a lot of great character. An excellent value for the price. (BELOW) One of my units of dismounted MAA desperate to come to grips with wealthy opponents. Also Old Glory. 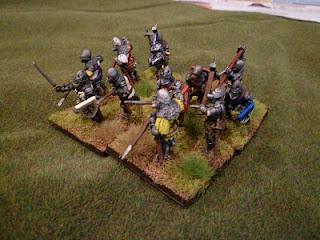 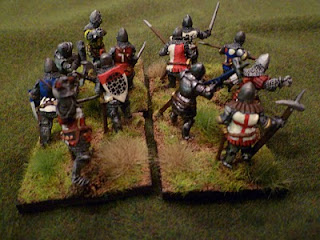 For comparison, I posted some pictures (BELOW) from a battle last year with the old basing system. The new basing really makes a huge difference. 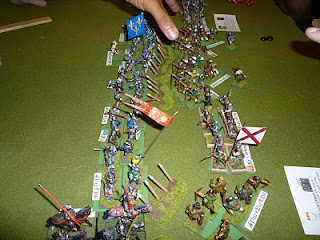 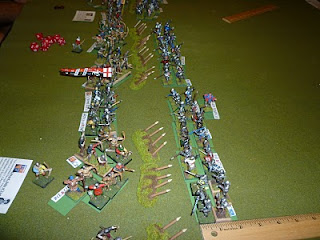 Getting back to the basics: Primer and Varnish 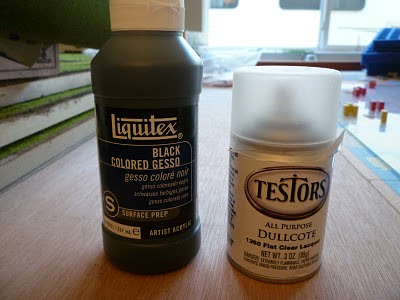 I've tried a lot of new things this year. I now paint with an Optivisor and it has significantly improved my detail painting. I'm also adding Silflor tufts to my bases for my current rebasing project (more on that later).

Two of the new things I tried this year didn't work out as well.

I used to use gray metal primer spray I bought at Home Depot to prime my figures. It was affordable ($6) and the can seemed to last for a while and get pretty good coverage on the figure surfaces. I then would varnish with gloss spray varnish (also $6 from Home Depot) and then finish it off with a spray of Testor's Dullcote to take away the glossy sheen.

While recently at a game store, looking for a new can of my reliable Testor's Dullcote, I was talked into buying a can of Games Workshop black primer. The store manager(?) explained how GW had a carefully designed primer recipe that ensured good coverage without covering up the details of the miniatures. I also bought a spray can of "Purity Seal", the matte varnish spray provided by Games Workshop because the store didn't have any Testors products. I'm an open-minded guy, willing to try new things, but I did sputter a little at the the price tag for the cans ($15 each). Especially for a can named "Purity Seal." Really...

I assumed they would be worth the cost.

The GW black primer seemed to do a good job on my figures, but the can was empty after I primed about 100 figures. And it ran out halfway through a batch of figures!!! I wouldn't mind this if it was my normal Home Depot primer, but for $15, I expected a little more capacity for priming figures.

Unwilling to shell out another $15 for another can of black primer to finish the job, I started to do some research and after visiting Allen Curtis' blog, I read that he had something called "Gesso" that he used for his painting. I vaguely recalled hearing about Gesso, but brush on primer was always something I imagined some 90 year old English gentleman brushed onto his 38mm Seven Years War flats in his library.

I've used spray primer for 20 years and I never tried any other method of priming my figures. I always assumed that spraying the primer was the quickest, most efficient, and best method of applying the primer. I perused the TMP message boards and read quite a few positive reviews of Gesso used as primer.

As I stared at the empty can of GW primer (Why don't they have a name for the primer? Maybe it should be called "100 Figures Made Black"), I began to consider my past experiences with spray primer:
So, I printed out a 40% coupon for Michaels Craft store, drove out to the store, and picked up the last bottle of Liquitex Black Gesso for $8.40. Once I arrived at home, I squirted out a little of the Gesso, brushed it onto the figures, and it worked great. No smell. No mess or mixing. Great coverage. It looks like it is enough Gesso to prime hundreds of figures. And it didn't obscure the detail on my Perry Miniatures' men-at-arms.

Now, about this Purity Seal. It definitely does the job and takes the gloss shine off of my gloss-varnished figures, but like the primer, it seemed to run out of steam after about 100 figures. It didn't perform any better than my old, reliable Testors Dullcote spray and I can buy at least 3.5 cans for the price of 1 can of GW Purity Seal.

Overall, both GW products produced satisfactory results, but the high cost makes them, in my opinion, a poor investment. Although I have to thank Games Workshop's high prices for giving me the motivation to try out Gesso. I think my wife thanks them too.
Posted by Castigator at 8:51 AM 10 comments: