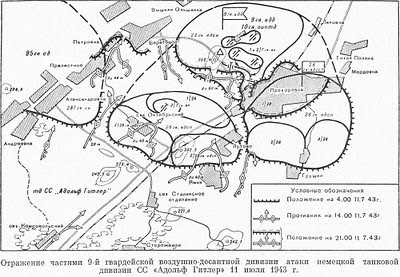 (ABOVE) Guards Airborne Division positions around Prokhorovka.
This post will provide some progress pictures of the painting I've been doing to fill out the 1st SS LAH Panzergrenadier Division's OOB for our Kursk project.

We ordered 10mm tanks and infantry from Pithead Miniatures.  I drilled out holes with a hand drill and glued plastic broom strands into the tops of the hulls for radio antennas.  Below are pictures of the German infantry and Panzer IV's in progress.  I primed them black and then glued the dirt ballast onto the bases.  I've learned through hard experience to glue the dirt on before I paint any of the details onto the miniatures. 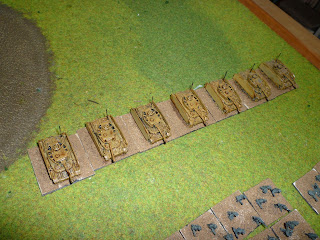 (BELOW) 15 poses of infantry in the German infantry pack!  Pretty impressive. 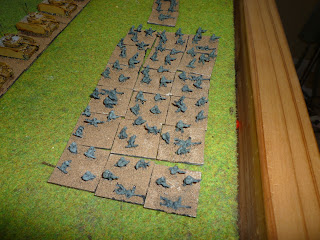 I then did a heavy drybrush on the tanks with Vallejo  German Cam Orange and on the infantry with Vallejo German WW2 Green.  It's always best to test these colors ahead of time, because colors that work well for 28mm might not look as good for 10mm figures. 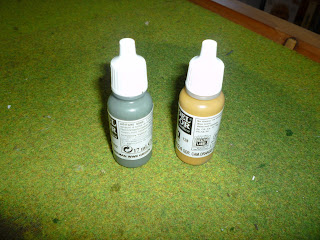 I then washed the figures with my standard ink wash, dark brown Wonder Wash, that I get from the Warstore. 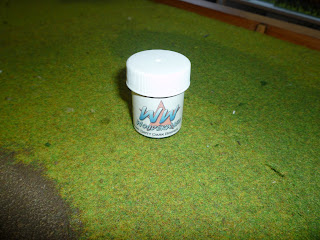 (BELOW) After the ink wash, another dry brush with the base color on the tanks. 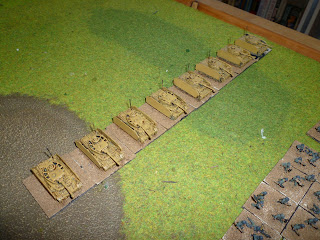 (BELOW) Here are the German infantry with some of the details painted. 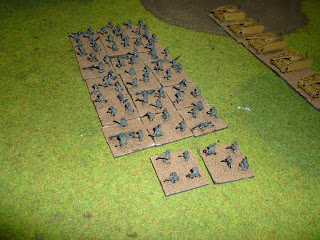 My next step after painting the faces and equipment was giving the infantry a good wash with my Wonder Wash.  This gives the infantry a bit of depth, but it does darken the first dry brush.  The wash also covered any areas that might have been missed by the primer.

I then went back and highlighted the uniforms with the Vallejo German WW2 Green again.  This draws out the sharp colors of the base paint that were dulled by the wash.  If it doesn't highlight the details enough, mix it with a little white to lighten the highlight color.  Once the painting is done, I brush watered -down white glue on all the base areas where the dirt ballast didn't stick perfectly and where the figures don't match smoothly with the bases.  Dip in static grass and basing is done.  Nice and easy. 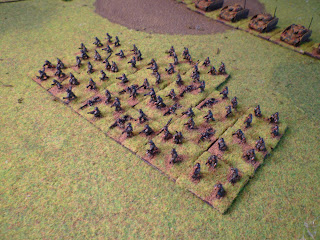 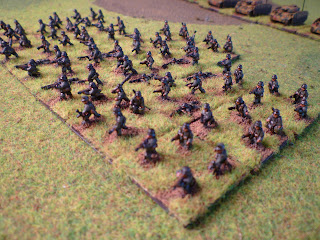 (BELOW) Here are the Panzer IV's after their final basing. and a dull cote varnish. 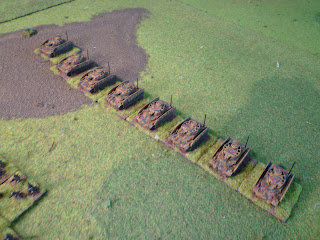 (BELOW)  I gave them a bit of dusting with some dirt and smoke pigments on their engines and the lower part of the side-skirts.I thought it might give the side-skirts a muddy look.  Do you think it looks good?  I might have gone a little overboard with it.  The final stage will be when I place decals on the tanks. 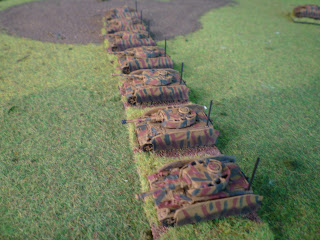 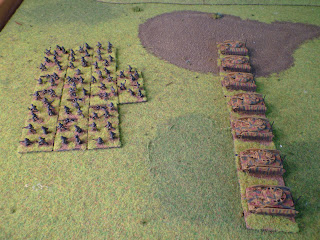 (BELOW) 2nd SS Panzer Grenadier Regiment and the infantry from the division's recon battalion.  I'll give them one more spray of Testors' dull cote to take the gloss from the ink wash off before they're done.  I think the infantry really came out great!  Excellent miniatures.  I finished them up in about 4 hours of painting: 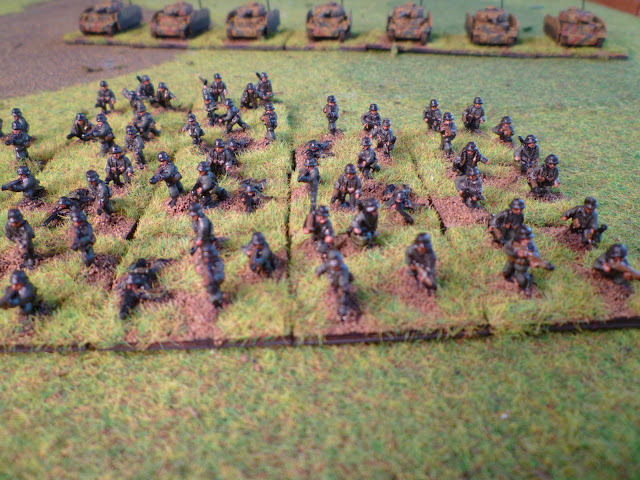 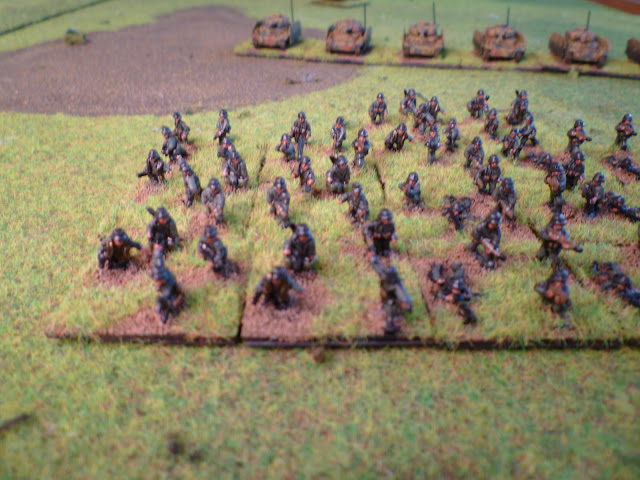 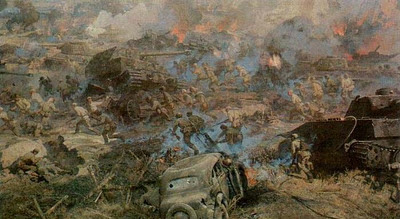 Well, we've embarked on a project to recreate the 1st SS Panzer Grenadier Division Liebstandarte's(LAH) drive on Prokhorovka during the Kursk operation.  The scenario starts on the afternoon of 10 July 1943 and ends on the afternoon of 15 July 1943.  I'm going to document our progress through this project to give gamers an idea of how you can make a game from a idea or concept you get from that latest book you read.  Most of the operational details for this scenario come from the excellent Kursk book by David Glantz: 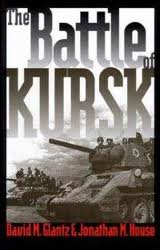 We're using the Field of Battle: WW2 rules to play out this large operational battle. The units in this scenario are 2 stand companies.  Companies are eliminated once they suffer 3 hits(stands).  Each day has 3 turns: AM, PM, and Night.  The map is shown below.

We're using 10mm miniatures.  The German infantry are Pendraken.  The Soviets will be Pithead Miniatures because they mix very well with the Can-Do pre-painted 1/144 plastic armor.  I purchased 48 Can-Do T-34's at Historicon so that did a lot to get this project going.  No one was looking forward to painting 48 T-34's. 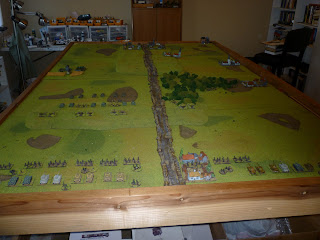 It might look hopeless for the Soviets, but the Soviets have more forces deployed across the middle of the board that are aren't placed on the table.  The 9th Guard Airborne Division is positioned in defensive belts in the middle of the table:  27 infantry companies, a tank brigade, another AT artillery regiment, and a KV-1 tank regiment.

On the Night turn of July 11 (Turn 5), the Soviets also bring on the 29th Tank Corps to counter-attack the Germans:  18 T-34 companies, 9 infantry companies, 4 assault gun companies, and a Guards Tank regiment.  Those reinforcements are sure to make the 12 July Day turns a lot of fun for the 1st SS PzGR commanders!

Basically, the Germans have to grind their way to Prokhorovka and attempt to get there without suffering devastating losses.  The LAH Division has a finite number of morale points and every time it loses a stand, it loses a morale point.  While stands can be rallied and tanks can be repaired, the effect of those losses on the Germans is permanent.  Once the Germans reach zero morale points, the division begins to check morale and once it fails, the operation is called off.

The Soviets, on the other hand, calculate morale points and check morale by brigade.  Once a brigade fails a morale check, it is removed from the table, but reinforcements enter the game fresh and eager for their chance to drive back the Germans.

Another rule we plan on using for the scenario reflects the fact that SS Totenkopf and Das Reich fought on either side of the LAH, but they had a terrible time making headway and the LAH Division was constantly worrying about its flanks.  We plan to use markers on each long board edge, Totenkopf for the north side and DR for the south side.  We'll roll a D6 at the end of each turn and if they roll a "6", the marker advances 1 foot reflecting the advance of the flanking forces (+1 next time if you fail, cumulative).  The Soviets can always spend 2 asset points on a Move card to bring on 1 reinforcing brigade on a flank on the next Move card, but it can never be behind the flanking markers.  The Soviet player has to announce he is doing this since the Germans usually saw the Soviets coming and get some advance warning. 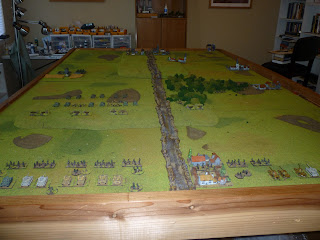 Below is a photograph of Hill 241.6 This is the first objective for the Germans.  It is defended by 2 Soviet AT artillery regiments (2 AT bunker companies each) and a Soviet Motorized Rifle Brigade (MRB) waiting patiently behind the hill.  The German armored companies start the game having suffered heavy casualties fighting though the Soviet defensive belts.  All 8 Pz IV companies have a 1 stand loss and the Tiger company has suffered 2 stands lost.  The Germans need to seize this high ground early to give them a sheltered area behind it where they can refit and repair their battered armor units.  The hill is a Turn 1 objective.  Take it before nightfall.  I scratch-built the bunkers out of Sculpey, wire, and toothpicks. 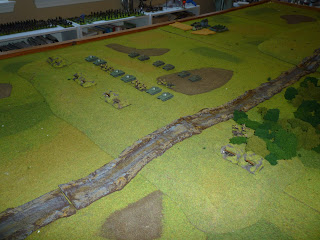 Below are the starting German forces.  The tanks are a hodge-podge of armor only because I haven't finished painting the Pithead Panzer IV's that were delivered.  During the play-testing, I'll slowly replace them with the finished miniatures. 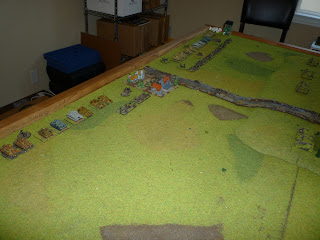 Below is  Prokhorovka, the ultimate objective.  As the project progresses, I'm going to paint and add more Russian buildings to fill out the town areas.  I use 6mm buildings for the terrain.  I think the 6mm terrain scales better than if we used larger 10mm terrain that matched the miniatures. 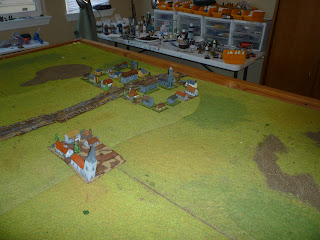 Below is a close-up of some of the Germans.  Pendraken infantry with plastic Can-Do tanks. 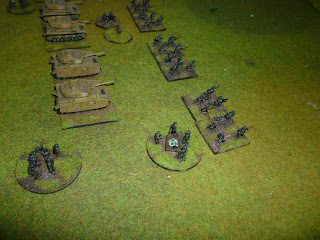 Below is the Pithead infantry and Panzer IV's.  The tanks are equipped with antennas (plastic broom stands) and sideskirts. 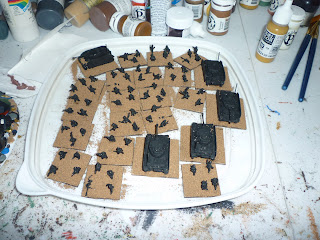 Below is a Panzer IV in progress.  Just testing out the paint scheme.  You know, it's always funny how the digital camera shots with flash bring out the flaws in my painting.  Looking at the pics, I notice small areas that need paint, but none of them are visible to the naked eye.  Interesting.  And annoying.  More to come! 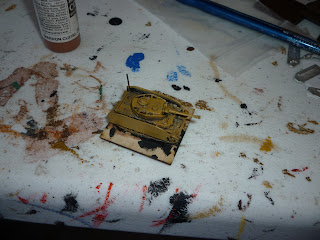