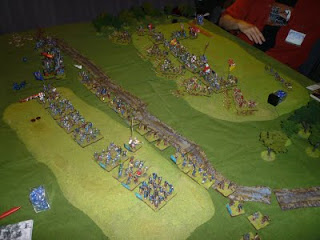 On Saturday, we ran a Piquet: Band of Brothers game at the GAMEX 2011 convention here in Los Angeles. The battle was set in the early Hundred Years War. During this war, the English would often launch raids (known as a chevauchee) through France. The raids would start at one English possession, rampage across the countryside, looting and sacking castles, and then end at another English possession. The English would then happily divide up their loot and high five each other. Sometimes, the French would manage to raise a large army to shadow or fight these raids.

In this scenario, the French army is pursuing an English raid led by the Black Prince. Feeling the heat of the close pursuit and slowed by his siege guns, Edward parked his army on a hill parallel to the French line of march and waited for them to approach. Once the French saw the English, they immediately deployed to do battle. 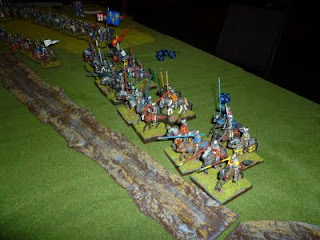 (ABOVE) The French mounted knights. They ignored the Constable's request that they dismount. A unit of retainer knights and three units of nobles with the Orriflamme. Scary! 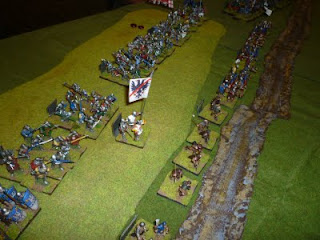 (ABOVE) A Marshal of France leading dismounted men-at-arms with Genoese crossbowmen and Breton skirmishers in front. 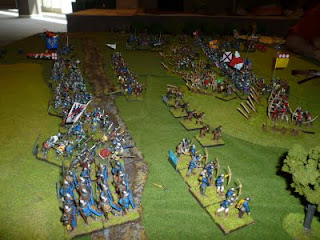 (ABOVE) The city militia and some locally raised archers have come to fight alongside their social betters. 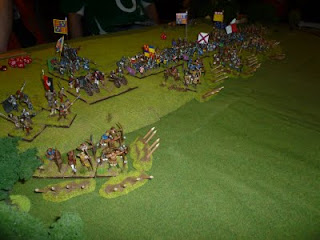 (ABOVE) The English defense opposite the French mounted knights. The archers at the bottom of the hill are Welsh and all of the archer units are protected by pits and stakes. I'm sure the Welsh appreciate being used as a speed bump by the Black Prince. "Hey, how come we're not up on the hill like everyone else?" 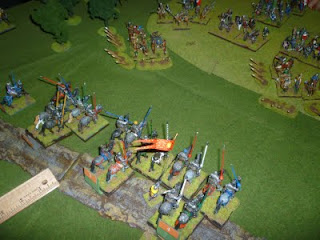 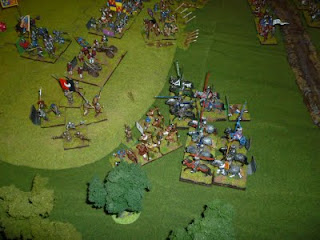 (ABOVE) Two mounted units left, but they reached the Welsh defenses. They eventually overran the Welsh, but by the time that happened, the French mounted units were wrecked. 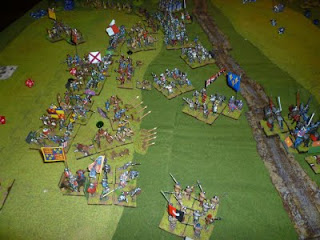 (ABOVE) Inspired by the destruction of their mounted wing, the rest of the French army began to walk across the battlefield under a storm of arrows. 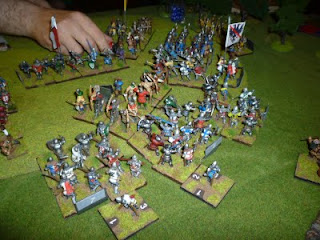 (ABOVE) The French pulled a Battle Lust card around this time and it allowed them to charge into combat with five of their dismounted knight units. That really dropped the hammer on the English. In the picture you see a unit of English longbowmen firing against a rising tide of armored knights, but the English do have a second line of their own knights to back them up. 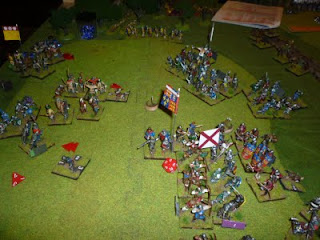 (ABOVE) The French missile troops actually performed pretty well. On the center right, a unit of Genoese crossbowmen is firing point blank into the English lines. The unit's status was Determined and they were firing with a D12+2. Unfortunately, by the time this photo was taken, they had lost half of their stands. They need to run already so the dismounted knights can get in there! You can also see the unit of French archers sneaking through the woods at the top of the picture. 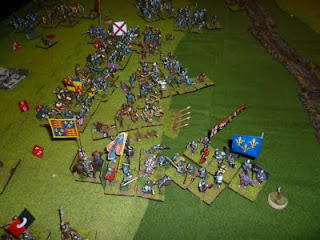 (ABOVE) As the fighting rages along the hill, the Constable of France leads his lust-filled knights to victory. Flushed with success, they pursue impetuously and run into the Black Prince and his household knights. Uh oh! With the French already disordered from their battle lust, this ended badly for the French and the CinC and his unit routed from the table.

After a few more phases, the French had 3-4 disordered units remaining on the hill, but no morale chips left to rally them. The English also reached no morale chips and drew their Major Morale Check card first. This check routed every English unit but the Black Prince's household and an artillery battery.

The Black Prince refused offers to surrender and wheeled his tired retainers to fight the dismounted French knights. Faced with his fearsome determination and reputation, the French then flipped their own Major Morale Check card and routed from the table. A close battle with both sides losing all of their morale chips and struggling to survive. Thanks to all the players who participated.
Posted by Castigator at 5:07 PM 4 comments: