This battle was a hypothetical Hundred Years War battle roughly based on the Battle of the Golden Spurs. A Flemish city has revolted against the authority of John the Fearless, Duke of Burgundy. Their revolt has been sponsored and supported by the Armagnac followers of the King of France. The Duke has raised an army of his vassals to enter the city and crush the revolt. The rebellious guildsmen are attempting to block the passage of the Duke's army at a river. If the rebels can hold off the Burgundians for six turns, it will encourage other Low Country towns to rise up against the Duke's authority. 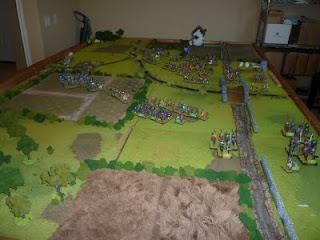 (ABOVE) View from the Burgundian side. 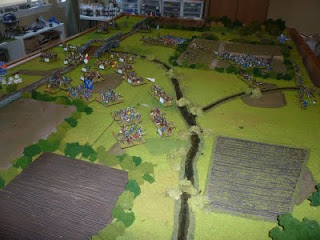 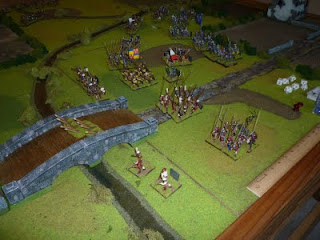 (ABOVE) This bridge is on the left flank of the Low Country defenses. It is barricaded. 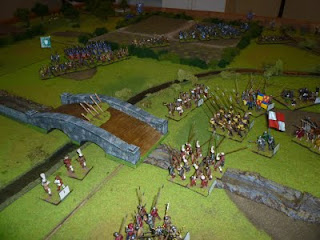 (ABOVE) The Low Country army consists of 4 units of militia pikemen, 3 units of mercenary crossbowmen, 4 units of burgher knights, a unit of mounted French knights, and an organ gun battery. Their general is Average. 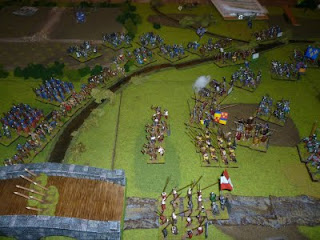 (ABOVE) The Burgundians have 3 units of mounted knights, 5 units of dismounted Burgundian knights, 2 units of mercenary spearmen, 3 units of Picardy longbowmen, and one unit of English longbowmen. Greg rolled up an Abysmal general. Poor Greg! 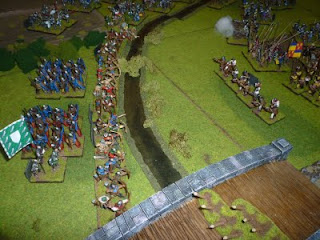 (ABOVE) The French archers approach the river bank and fire against the crossbowmen with little effect. 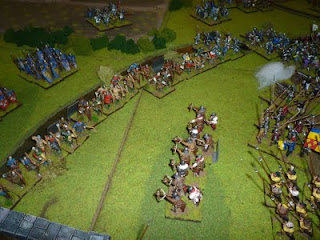 (ABOVE) The river has been crossed. 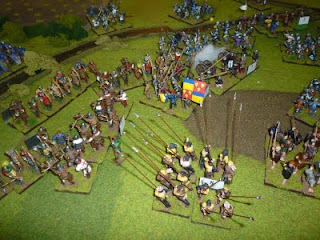 (ABOVE) The Burgundian knights crossed the river and were blasted by the organ gun. The organ gun fired with great effect during the early part of the game. Meanwhile the Burgundians successfully forced the bridge and Low Country pike units have started forming into Hedgehog. 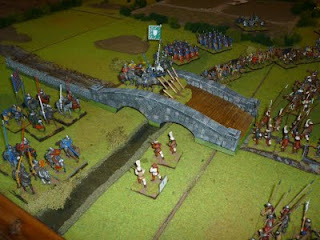 (ABOVE) Burgundian cavalry attempts to force the river and bridge. 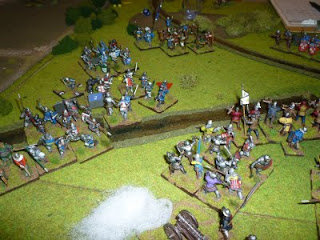 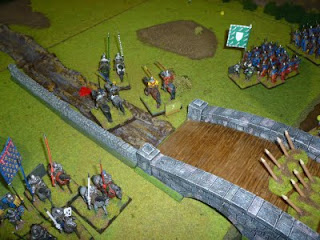 (ABOVE) The cavalry unit assaulting the bridge was driven off, but another unit of mounted knights managed to ford the river. (BELOW) 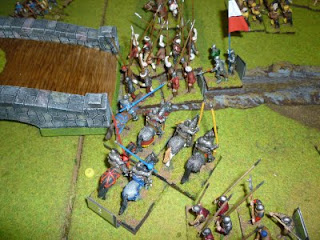 The knights crushed the disorganized militia pikemen, but were then caught while pursuing and defeated by the French knights who waited in reserve. (BELOW) 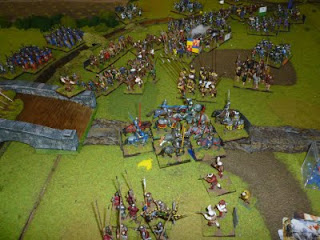 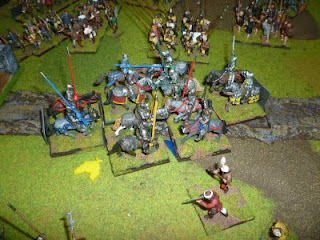 The end result was a resounding win for the rebellious burghers. It was a good playtest of the scenario that was made much more difficult because Greg's Burgundian general ended up as an Abysmal commander. The Burgundian knights are terrible and about the same quality as their rich city counterparts. Known more their courtly manner and fine clothing, the militia-rated Burgundian men-at-arms underperformed once they realized the common townsmen actually planned on putting up a fight. Greg probably rolled up at least half of his units as poor, battle weary quality.

The militia pikemen were average (good against cavalry), but the Low Country mercenary crossbowmen were very strong and I might reduce them to two units the next time we play. The heavy armor of the crossbowmen was a big advantage against the Picardy longbowmen. The organ gun battery was fun and did pretty well.

Greg felt the river was too difficult an obstacle, so I plan on reducing it to a Class II obstacle. That will still make the river a Class III obstacle for the Burgundian mounted extra-heavy knights.