I've had the Field of Battle World War 2 (FOBWW2) rules for some time now, but I hadn't used them for any actual wargaming. After browsing through the rules and playing them a few times solo, I had the guys over and played a quick intro scenario. The setting is 1944 France and an American infantry regiment has to capture a town in two turns (by nightfall) that is defended by a German infantry battalion. The Germans are poor quality troops, but they are led by a skilled commander.

Units are three stand companies. The town is a Class III town that can hold 4 units. The woods are Class II woods. The hills are Class II hills. The farms and everything else are just there for looks.

The American infantry and HQ's are 12mm Minifigs. All of the rest are 10mm Pendraken.

(BELOW) The Americans approach the quiet valley from the hill on the right. The village is in the upper left of the play area, defended by volksgrenadiers and assault guns. The play area is restricted to 4 feet wide by the line of woods at top and bottom. 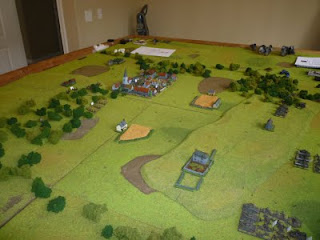 (BELOW) A better look from the American perspective. The three American battalions can be mixed commands during this period and they each have armor companies attached to them. The round bases are battalion HQ stands and each HQ has a heavy weapons marker that represents the assets of the Heavy Weapons Company. The Americans started a little clumped together, but as soon as the first German artillery landed, the Americans spread out in a hurry. 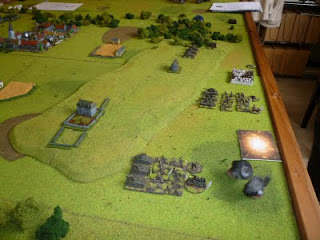 (BELOW) Heavy fire between the advancing Americans and the defending Germans among the quiet farms of the valley floor. In the game, you can fire whenever you want, but once you're unloaded, you can only fire again when you draw a Firepower card. 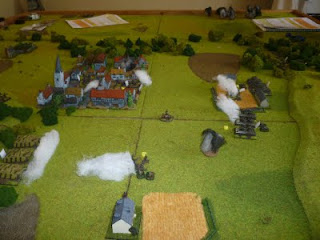 (BELOW) After the first American assault was repulsed, the Americans attacked out of the woods and charged into the town again. Good use of combined arms allowed the Shermans and infantry to finally drive out the Germans. The yellow beads mark suppressed units. 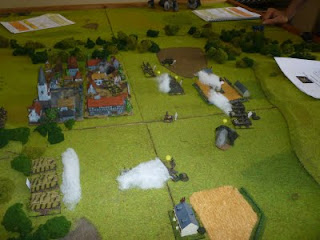 (BELOW) A German reserve infantry company was strafed by American airpower and lost a stand. In 1944, the Germans should not be leaving their units out in the open. I learned a lesson on this one. The German command stand is next to the infantry company. 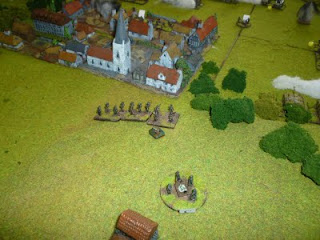 The Germans were unable to retake the town with the damaged reserve infantry company and they failed a Morale check to end the game. The Germans withdrew to fight again another day. Each force has a certain number of Army Morale Points (AMP) that are rolled for in the beginning of the game. You lose an AMP every time you lose a stand as a casualty. While your leaders can rally stands back and get units back to full strength, you can never recover lost AMP's. Once you have no more AMP's you have to take a Morale check every time you pull the Morale card. If you fail the Morale check, your army retreats.

We took a pub break and then returned to replay the game.

The Americans had two battalions to defend their new prize. They were also given the full artillery support of their division and airpower. As morning broke, they were attacked by Germans from the 116th Panzer Division ("Windhund"). (BELOW) After the panzergrenadiers were thrown out of the town, it was left up to a company of Panthers to clear out the suppressed and battered American defenders on its own. So much for infantry support! The poor American HQ stand is about to hop into their truck and beat feet!

I need to dullcote these guys, the gloss shows up too much with the photo flash. 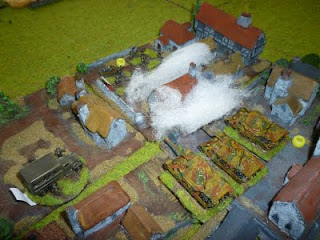 (BELOW) Artillery spotting round markers and a barrage template. Spotting rounds are placed during the Command card and the artillery fire falls on the Indirect Fire/Barrage card. The Americans have excellent artillery in this game. They used Time on Target artillery to pretty good effect during the game. 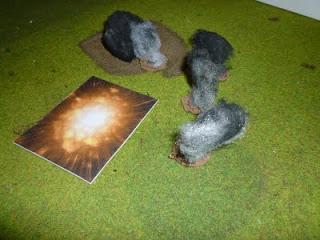 (BELOW) The obligatory home-designed card shot. You know that I like the game if I made cards for it. The cards arrived in the mail from Artscow as we were deploying the troops. Great timing! 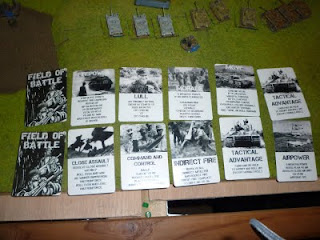 Overall, the game was great fun and the action was fast and furious. The artillery rules are very easy and seem to really work well. The systems used in the game are very elegant and the consistent game design philosophy means that even new players will be running through the rules in no time. Fun combat results with very little need to consult the rules.