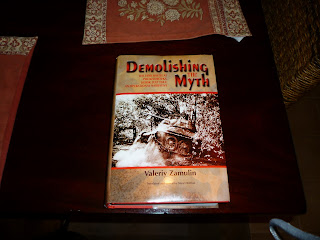 "Demolishing the Myth" is a book that I've been waiting to get my hands on for a few months now.  As those who follow my blog know, I have been deeply involved in designing a Field of Battle: World War II (FOBWW2) scenario to simulate the LAH 1st SS Panzergrenadier Division's attempt during the Kursk battle to capture Prokhorovka Station.  FOBWW2 is a Piquet-family game that puts you in the seat of a division commander.  The smallest units are companies.

"Demolishing the Myth" was written by Valeriy Zamulin in 2005.  Zamulin was the Director of Research at the Prokhorovka Museum and only recently has this book become available in English.  Stuart Britton did an excellent job translating this book to English and the transition from Russian to English is flawless.  The book offers a Soviet perspective of the fighting around Prokhorovka and gives a fresh look at a battle that previously has been described mostly from the German point of view.

The book is 630 pages and each page has a nice, glossy feel to it.  The book is extremely heavy and I actually weighed my copy in at 4 pounds!  It contains 38 contemporary color photos taken by the author of viewpoints from the battlefield (BELOW).  Black and white photographs of action scenes and important leaders are present throughout the book. 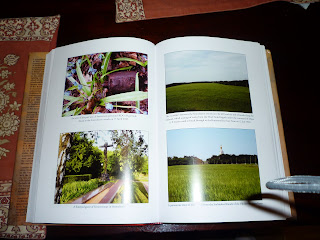 There is an excellent map section (9 maps) that clarified for me the different units involved in this very confusing battle (BELOW). 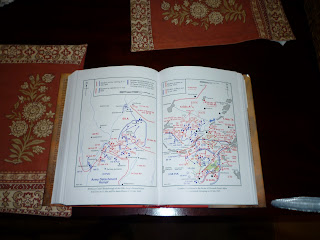 And there are tons and tons of charts recording the strengths and casualties by vehicle type and troop rank of the German and especially the Soviet units involved (Example BELOW).  Everything you wanted to know to develop a wargaming scenario. 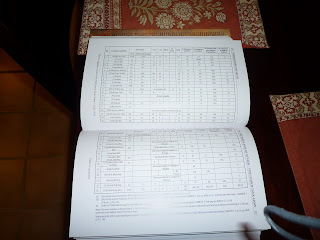 The author writes from a Soviet perspective and often refers to the Germans as "the enemy" and Soviet units as "our"  units, but I hardly cared.  I was too blown away by the insight he gives into the different brigades, the conflicts between the leaders, the mistakes made and heroes proven on the battlefield.  Zamulin combines tactical descriptions of the action during the battle with personal accounts of the men who fought there.

I was particularly moved by a passage where the book described  how the uniforms of the tank crews became soaked with fuel and grease while they worked on their tanks.  Then when they entered combat, direct fire and artillery would hit the T-34 and often puncture the oil and gas tanks.  Gas would drain into the interior of the tanks and soak the crews.  Only the slightest flame or spark would  ignite the uniforms of these brave crews.  Horrifying.

I recommend this book greatly, but I will warn buyers that it is very focused on the Prokhorovka portion of the Kursk battle.  If you're into Prokhorovka like I am, this book will become your bible.  When it arrives, you will thumb through it like a hungry wolf, trying to decide which chapter to devour first.

So using this new knowledge, I made some adjustments to my own "Drive on Prokhorovka" scenario.  I will post in a few days on this current play test of the scenario. 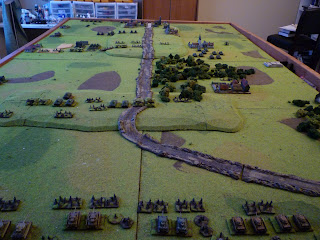 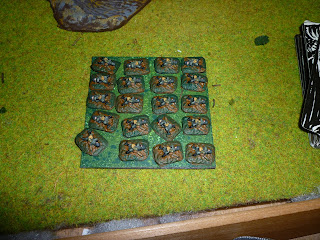 (BELOW)  Only half of the Germans are deployed!  The rest show up on the next morning. 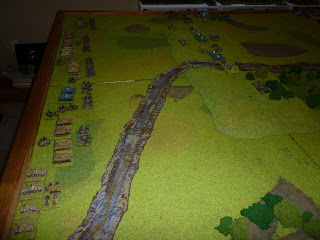 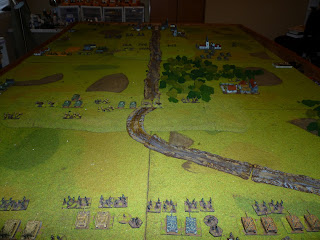 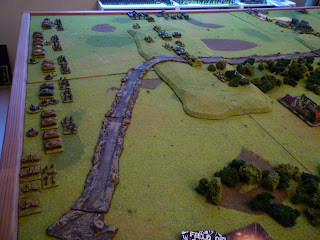 (BELOW) I've started using these neat Litko explosion markers for suppression and to mark when a unit was eliminated...I'm very happy with them.   I always try to avoid using beads and other markers to represent things on the table.  I'm now using smoke for unloaded, the explosions for suppression, and dead guys to represent stand losses on both sides. 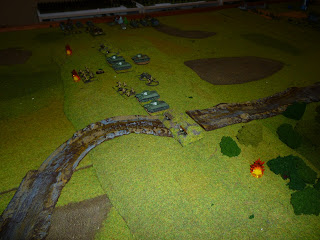 (BELOW) The German dismounted panzergrenadiers benefit from the Superior Firepower card.  Two Soviet infantry units are destroyed and another one is suppressed. 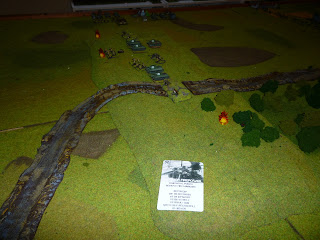 (BELOW) A normal Firepower card results in general fire from the tanks and infantry of 1st LAH Division.  More suppressions and casualties are the result. 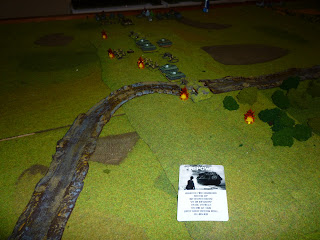 (BELOW) This panzergrenadier group thought it might be able to clear out the 99th Tank Brigade units along the  Psel River, but just like their historical counterparts, the Soviets responded with a hail of effective fire, suppressing all of the infantry in the group.  Not so easy, eh, Hitlerites!? 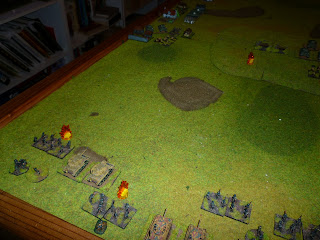 (BELOW) A German Command and Control card drops a spotting round on the Soviets and the on the next card, in drops the Nebelwerfers!!!  Stalin's organs eat your heart out!! 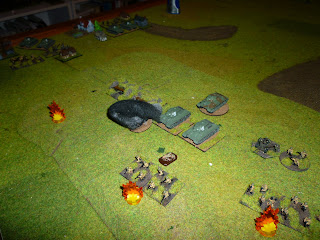 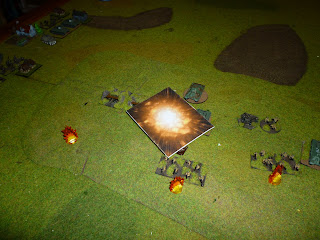 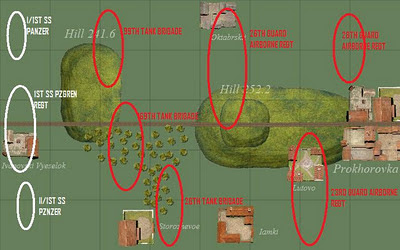 Above is the deployment map for Turn 1 of the Drive For Prokhorovka scenario.  The Guards Airborne regiments are frozen in place until they are attacked or 11 July 1943 AM (Turn 3).

I thought I would post the data I've gathered for this scenario.  Please feel free to evaluate my info and make comments in the Comments section of this post.

Here are the basic TO&E strengths I developed for the units involved during this period.  The most shocking thing is the weak tank strengths the Soviet tank brigades had.  Apparently, the Soviets didn't give their brigades the third tank battalion until after the Kursk campaign.  Bummer. 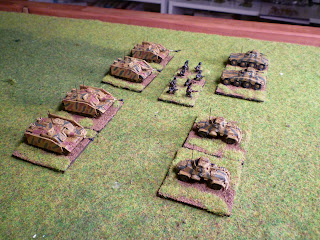 I've been steadily working at painting up all of the 10mm Pithead miniatures I need to field the 1st SS Panzer Grenadier Division for our Kursk "Drive to Prokhorovka" campaign.  Here are some photos of the 1st SS Recon Battalion or Aufklarungsabteilung.  Two armored car companies and a halftrack-mounted infantry company.  They are backed up by two Stug companies from the division's assault gun battalion.

All I have left to do for the Germans are 4 Pz IV's, 2 Stugs and the 6 Marder III's from the AT Battalion.  They are in the mail right now!  Then maybe a few halftracks and trucks to represent the grenadiers when they're mounted and travelling in style. 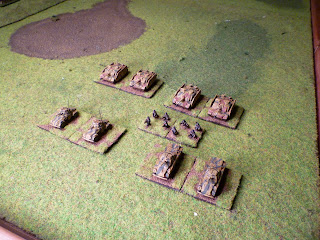 I hand-painted the German crosses on the armored cars, but I have 10mm decals that I plan to use on the Stugs.  I'm just waiting for my decal solvent to arrive in the mail before I apply them.  I'm also waiting form some brown, dirt-colored Vallejo pigment to arrive to weather the tanks a bit.

I also replaced the antennas with smaller thinner brush wire which I think really looks great for radio antennas.

In a week or so, I'll probably be able to post a picture of the entire division.   I've also finished my first version of the OOB for the campaign which I'll post in a few days.