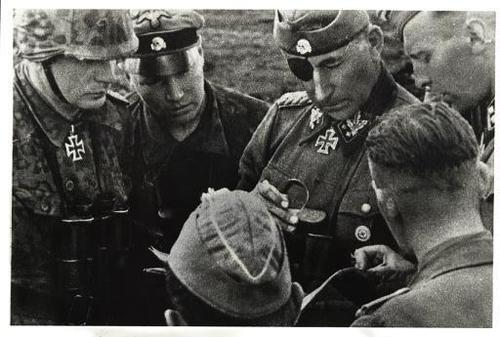 Okay, if you're the German player and you've reached 0 morale points (out of 50) without capturing Prokhorovka , the gentleman with the eye patch in the photo is not happy with you.  That is Paul Hausser, the commander of II SS Panzer Corps.

So, here is an alternate ending process that gives the German players a chance to still attempt to win the game while higher headquarters slowly pulls away resources and diverts them to the efforts to assist Army Detachment Kempf and Das Reich southeast of the battlefield.

First, the German players always have the opportunity to just end the game if the division fails its Morale check.  If they decide to continue because victory is just within their grasp, the following game end rules take effect:
I'll finish up the playtest with this optional ending and let you know how it goes!!
Posted by Castigator at 7:51 PM 1 comment: 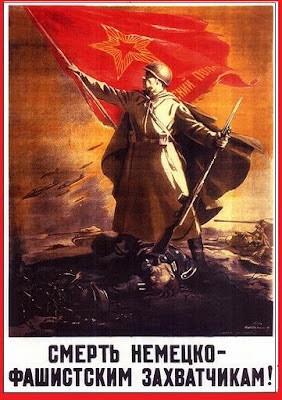 This will be an ongoing record of my second play test of my Kursk: Drive on Prokhorovka  scenario using the Field of Battle: WW2 (FOBWW2) rules from Piquet.  The units are companies, the commands are battalions and brigades, and 3 turns (AM, PM, and Night) make up a complete day of fighting.

In FOBWW2, each side activates based on the cards in its deck.  To start a turn, each player rolls an initiative die (Germans D12, Soviets D10).  The difference is the number of face down cards each player draws from their deck for the upcoming phase.  The winner of the die roll decides who goes first.  The active player then flips his first card and acts on it.

This turn ended immediately when I rolled a "10" for each side's initiative on the first die roll.  Tied initiative rolls immediately end a turn.  Presumably, poor weather or the general exhaustion of the troops in this sector meant that very little significant action occurred in the afternoon.

A few Soviet cards allowed them to move formations around and rally a few units, but then the Germans ended the Night turn with a Morale card and we moved into the morning as the sun began to dawn over the battlefield.


The Soviets pulled a Move card and I finally was able to bring in the 32nd Tank Brigade on the long south side of the table.  The Germans had prepared a nasty welcoming committee for the tanks on their side of the AT ditch, so I decided to have the reinforcements enter the battle on the Soviet side of the ditch.


Throughout the morning, the battle raged as the Soviets increased their pressure on the German defenders.  Both sides were suffering heavy casualties, but the Soviet leadership continued to force the issue and push its battered tank units into combat.

The Germans finally reached zero Army Morale Points. Basically, this means the operation has reached the point where heavy losses and resistance have forced the 1st SS PG Division and its higher HQ, 2nd SS Panzer Corps, to consider calling off the attack.  Each time the Morale card appears from the German deck, the Germans must now pass a Morale check (D12 vs. D8 (first time), D10 (second time) or a D12 (all other times)).  If the Germans ever fail a morale check, the attack is cancelled and the Soviets win.

The Soviets had great success on the northern side of the embankment.  Despite heavy casualties, the 18th Tank Corps managed to destroy the German armor and reduce the opposing 2nd PG regiment to a few infantry companies defending the Psel River villages.  Desperate to prevent a Soviet breakthrough that would endanger the German successes in the center,  the Germans rushed panzer grenadiers from the Das Reich Division behind their lines to plug the gap.

The Soviet 5th Guards Tank Army commander surveyed the battlefield with satisfaction.  He had stymied the Germans in the south half of the battlefield and his troops were poised for a breakthough on the north side.   Suddenly, he pulled a Morale card from his deck.  One tank brigade routed, but the others stayed firm.  His next card was another Morale card!  A motorized rifle brigade and an airborne infantry brigade failed their Morale checks and fled the table, but the fearless Soviet armor formations fought on with grim resolve.  Ready to exploit the promising position in the north, the Soviet commander pulled his next card and stared as he was faced with a 3rd Morale card!

The Soviet brigades finally folded under the relentless pace and losses of the battle.  Four Soviet tank brigades, including the entire 18th Tank Corps, broke and the survivors came streaming back, desperate to escape the death and destruction of the battlefield.

Only two formations remained as Soviet reinforcements.  The 53rd Motorized Rifle Brigade was ordered to advance through Prokhorovka and defend the western approaches to the city against the advancing German panzers.  That left one rifle regiment in the Soviet reserve pool and they were earmarked for a desperate attempt to hold on to the city itself.

The Germans began to press the attack as both sides struggled like punch-drunk boxers.  The Germans pulled a Morale card and passed their first Morale check to keep the game going.  The German tanks attempted to advance along the embankment road, but were thrown back by heavy fire from a Soviet SU-152 company.  The Germans geared up for an all-out effort to seize Prokhorovka from the north and the center.  The fanatical Germans fought without concern for their losses and threw themselves at the weary Soviet defenders.  (Once the Germans reach 0 morale points, it is time for them to make a desperate assault.  Their overall casualties are no longer important to them.)

Before they could make much progress, the Germans pulled a second Morale card (D12 vs. D10) and rolled a "1" to end the game.  1st SS PG Division headquarters received a message from its corps commander, SS-Gruppenführer Paul Hausser, that instructed the division to halt immediately and consolidate in their current positions.  The axis of advance would be changed and the division's movement would be re-oriented to the South in an attempt to surround and pocket the Rifle Corps defending against the Das Reich Division.

It was a great battle and it was close at the end.  If the Germans could have had better luck on their morale results, it might have been a much closer affair.

I should point out here a minor tactical mistake I think I made here with how I managed the Soviet tank brigades.

The typical Soviet tank corps has 3 tank brigades and 1 motorized infantry brigade.  If an infantry attack is required to seize a town or some other strong infantry-held position, the infantry brigade has the muscle and numbers to capture and seize rough terrain.

Unfortunately, there were times when I was desperate to bring up infantry to attack German-held objectives that were virtually impregnable to armor.  I sometimes used the infantry from the tank brigades to do this and they took casualties during these attacks.  On one occasion, the motor infantry battalion of the 181st TB took such heavy losses that it drove its parent tank brigade into shattered status (0 morale points).  Then the 181st TB failed its morale check and routed off the table without its tank companies ever having fired a shot in anger!

A complete waste, but the lesson I've learned is to bring the brigade into the line of fire as a brigade and make sure that if any casualties are being suffered, the T-34 companies are dishing out damage at the same time.

On the German side,  it is important to keep the Marder AT units in cover or at long range.  Too often in the game, the Marder units were pushed forward to provide AT support and they ended up taking heavy damage from attacking Soviet armor.  As lightly armored, open top vehicles, the Marder companies are far more vulnerable than the other companies in the German OOB.  German players should be careful to keep the AT resources at long range and in the rear and avoid the temptation to use their "independent" command ability to push them forward with attacks.  The Marders are at their absolute best when used during phases where the German has 6+ cards and might be able to pull them back out of LOS after they fire.
Posted by Castigator at 1:56 PM 6 comments: