Well, we played out the battle of Agincourt at the local convention: Gateway 2010. Luckily, I had at least one experienced player on each side. Jason and Adam (French) and Ilan (English) had all played Piquet before. Jason and Ilan also played in the play-test games before the convention. Two English players were new and one French player was new, but they seemed to get the hang of the rules as we played.

Overall, I'm not really happy with the way the green metal bases look, but the figures are based individually for Warhammer Ancient Battles and I wanted to have some flexibility to try them out for different systems so I'll have to put up with them for now. I'd be willing to commit to basing for Piquet stands, but I want to be sure the guys I play against are ready to make the move before I do. Nothing is more annoying than having to rebase your figures for another new rule set. So far, everyone seems to like Piquet: Band of Brothers, so it looks promising. 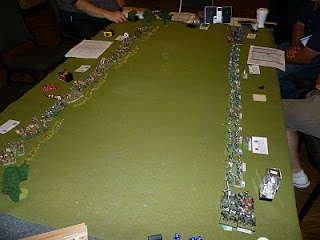 (ABOVE) Here's the opposing sides before the game began. The English (left) began showering the French (right) with long range volley fire. The French ran to the battle line and launched their attack. The voice of the Constable of France could be heard pleading, "Remember the plan!!!" 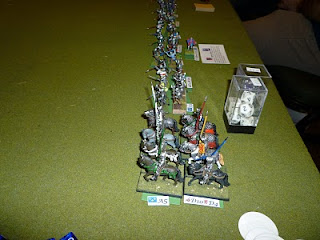 (ABOVE) Closeup of the French mounted units on the left flank. Not many, huh? Where were the rest? Sleeping, arguing, eating, watering their horses, sulking....you get the idea. These were Greg's knights. Greg contributed approximately 90 figures to the battle which took some of the painting pressure off of me. Thanks Greg! 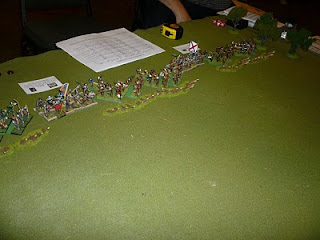 (ABOVE) The English longbows behind their stakes. 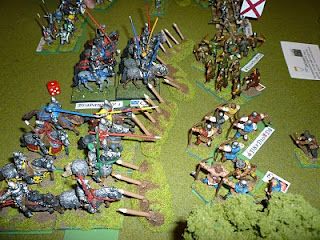 (ABOVE) The French right flank mounted knights charge against the English and Welsh longbows. Those stakes look painful!! Their leader, Cligny de Brabant, was shot through the visor by a longbowman and died instantly (1 in 20 chance). This was significant because his unit later routed the longbowmen in melee, but without the leadership of Brabant, the mounted knights pursued the fleeing archers with reckless abandon and were not seen again on the battlefield. 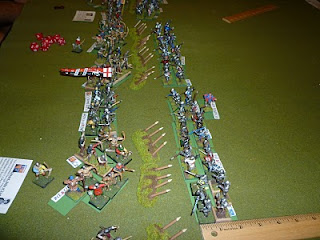 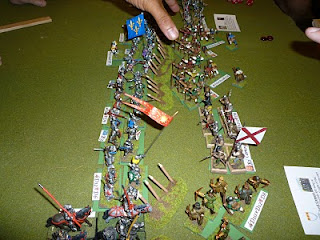 (ABOVE) The French king's sacred banner, the Oriflamme, leads the way to inspire the French. Never mind the fact that the French king and the Dauphine were safely camped back at Rouen, eating delicacies and getting manicures. 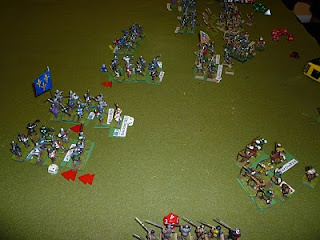 (ABOVE) Well, that was the high water point for the French. After we broke for lunch, the English went on an impetus tear. 19 impetus, 16 impetus, and then 8 impetus. A series of devastating point blank longbow volleys ripped through the French ranks as the archers fired, reloaded, then fired again. Lord Camoys led his band of English men-at-arms to victory against their heavily armored opposition. Camoys then started to threaten the flanks of the neighboring units. You can see his unit at the bottom of the picture.

Henry V lead his noble household and the Knights of the Garter into the battle and smashed the disordered column of French nobles facing him. Henry then wheeled his trusted companions into the flank of another disordered block of French knights which fled amid shouts of "Treachery!"