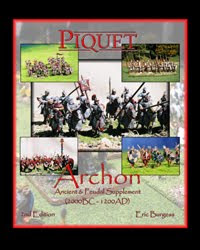 All right. I've always been interested in the Ancient periods, but the only 28mm "Ancient" army I ever painted was a Hiberno-Norse Viking army I painted for WAB's Shieldwall book.

Since I have these nice Vikings all painted, based, and ready to go, I thought I might offer my exploration into the Piquet Archon rules as a mini-review of the book for the curious.

The Archon 2 book is the second edition of the Ancients supplement for the Piquet Master Rules. Written by Eric Burgess, the book itself is 206 pages and contains rules and army lists (campaign musters) for approximately 140 armies from 1700 BC to 1283 AD. Chinese, Mayans, Visigoths, Romans, Trojans...they're all in there. The Asian armies are also well-represented.

Each army period is organized and contains the various army lists that would traditionally fight in that region and period. I'm going to focus on the "Viking Wars" period. It is one of the smaller periods and it only lasts from pages 192 to 194. It contains three army lists: Vikings, Anglo-Saxons, and Normans.

Shieldwall is obviously important for this period and as with many of the special formations used in the time periods covered by this supplement, there is a special rule for this formation. Units may enter or leave the shieldwall formation only when the Deployment Sequence Card is flipped. Shieldwall gives extra protection from missile fire and in melee. The disadvantage is that units in shieldwall move half and do not get the UP1 bonus for initiating melee.

The intro for each period summarizes the military history of the period and lists the historical battles and time of occurrence for each battle.

The Saxons have shaky cards. They have Courage cards which force them to check their morale and Milling Around cards which waste their time.

The Normans have a strong Sequence Deck which does not match the heroism or melee capacity of the Vikings, but gives them good cavalry action and overall flexibility.

The Army Characteristics Table again places the Saxons at the bottom of the pile. They get less morale points/ACD cards per unit than their two opponents.

There are several special sequence cards that apply to armies in this period:

Battle Lust - This card acts as an extra Melee Resolution Card (it allows you to fight a melee). Units that are affected by the Battle Lust card get an extra bonus for melee and they must always pursue. Other units affected by Battle Lust who are within a move of an enemy unit immediately move into contact and must initiate melee if possible.

Heroic Challenge - This card allows the player to make a personal challenge with one of his leaders against an opponent's leader. Refusing the challenge costs a significant penalty in morale chips. Losing a leader to a challenge causes the normal penalties for the death of a leader.

Pillage and Loot - Ill disciplined units will have to check when this card appears. If they fail the check, they head toward the enemy's camp and loot the camp until they are brought under control by their commanders.

Uncontrolled Charge - Affected units will involuntarily move toward disordered or routed units and melee them immediately. There is a chance to remove the card from the deck after it appears.

Undisciplined Advance - If the army commander fails a Leadership Roll, his entire army will begin to involuntarily advance toward the enemy. They will only stop advancing once the general successfully makes his leadership Roll. There is a chance to remove the card from the deck after it appears.

Ineffective Missilery - Missile fire from militia units is reduced by one die for the turn. There is a chance to remove the card from the deck after it appears.

The armies each get individual army composition lists for their forces: 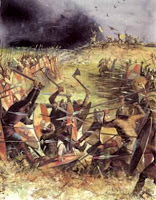 Most of the Viking units are bondi units of varying quality. These are the average Viking troops. They are able to form Battle Line, Battle Order, and Square. They can also lock their shields to form shieldwall.

You can upgrade 1 or 2 bondi units to huscarl units. These units are much higher quality than the bondi.

You can also have 1 or 2 archer units.

There are Berzerker rules for the Vikings. Two units can be designated as Berzerkers before the battle begins. They are great in melee and are treated as fearsome, but they have no armor. Alternately, the Viking commander can make up to two bondi or huscarl units decide to go berzerk during the game on a Heroic Moment card. Inspired by their warchiefs, the troops fly into a rage.

Berzerkers are powerful units and when they are successful, they inspire the army, but if they lose a melee or rout, their defeat can have a devastating effect on the overall morale of the Viking army. Berzerkers are a gamble and they can win a battle for the army, but the army looks to them for inspiration and if they suffer a setback, they can lose a battle.

Vikings are affected by the following cards: Battle Lust, Heroic Challenge, Pillage and Loot, and Uncontrolled Charge. Obviously, it is easy for this army to get overenthusiastic and out of control on the attack.

This army is an interesting one.

Half of the army can be housecarls. They are better than Viking bondi and not as good as Viking huscarls, but there are a lot of them. The housecarls can form Battle Line and Battle Order. They can also lock their shields to form shieldwall.

The fyrdmen and a few bow-armed skirmishers make up the rest of the Anglo-Saxon army. The fyrdmen are mostly bondi-quality, but some are even worse. These troops represent the common Saxon regular militia. The fyrd can form Battle Line and Battle Mass (a less organized Battle Order). They can also lock their shields to form shieldwall.

The Anglo-Saxons have one more trick up their sleeves. Their housecarls and fyrdmen are armed with darts. Darts represent various short range missile weapons that the Saxons can throw at their opponents as they get close. These missiles give the Saxons some chance to disrupt attackers as they approach their battle lines, especially if the Saxon shieldwall is arrayed along a superior position like a ridge.

Anglo-Saxons are affected by all of the cards for this period. Only the housecarls are affected by Battle Lust. This army obviously prefers to stay in shieldwall and await the attack with its missile fire, but the various involuntary movement cards will make it difficult to keep the Saxon troops from losing patience and breaking ranks. A poorly timed Ineffective Missilery card could also be devastating.

Approximately half of this army is stirrup-equipped heavy cavalry. Heavily armored and bad news for unprepared infantry. The stirrups give the cavalry an UP2 modifier when they initiate melee rather than the normal UP1.

The remaining units in the Norman army are sturdy spear-armed infantry. They are equipped with a mix of heavy and medium armor.

The disciplined Normans are only affected by the Pillage and Loot card.

So there you have it.

The Vikings are aggressive and can gamble with a few berzerk units on the assault, but they can easily lose control of their assaulting troops.

The Anglo-Saxons rely on their plentiful housecarls to bolster their shieldwall, but the poor discipline of the troops, especially the housecarls, can ruin the best Saxon defensive plans. Hello! Hastings?!?

The Normans have good troops and excellent cavalry, but they should wait until their enemies are out of shieldwall before they move in to attack. Efforts should be made to lure their opponents out of good positions.

That's only three pages out of the book and I think Eric Burgess did a great job of framing army lists that can let you fight many exciting battles between these historical Dark Age opponents. Each army has its own personality, strengths, and weaknesses.

This high level of detail and careful design is consistently present throughout the book. If you're interested, the Archon supplement book is available at piquet.com.
Posted by Castigator at 7:56 PM 2 comments:

Well, my divorce from Warhammer Ancients Battles is now official. I recently rebased all of my WAB Hiberno-Norse Vikings to 40mm square bases for Piquet: Archon. This will allow me to fight the Viking Wars period with my Norse raiders. Miniatures are by Crusader. 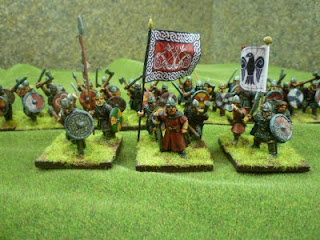 (ABOVE) The Raven King and his two rival sons.

(BELOW) These bases will identify the huscarl units. 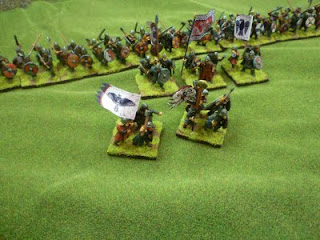 The Viking list consists mostly of bondi units. There are a few huscarl elite units and a few archer units, but the majority of the army is the bondi shieldwall (BELOW). 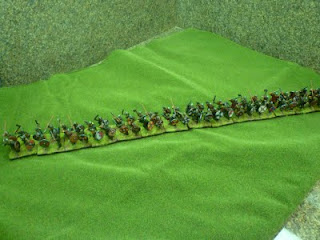 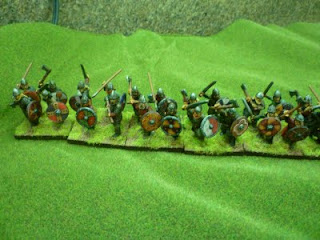 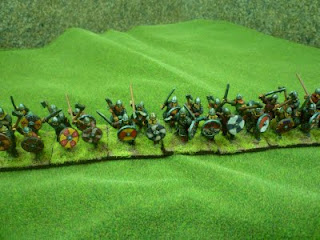 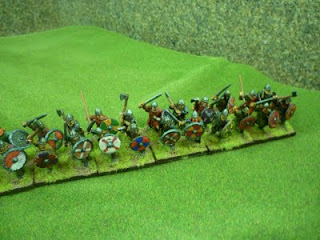