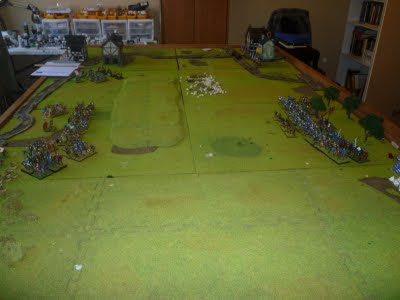 With our plans for a Punic Wars game cancelled, we decided to set up a 28mm Band of Brothers Hundred Years War battle. The game table was generated as an encounter battle using the excellent Theater of War Piquet campaign rules reviewed elsewhere in this blog.

Greg (RED) commanded a Free Company of ravagers and freebooters who had missed their opportunity for glory and ransom at Crecy. I (BLUE) commanded a contingent of local vassals and common troops who were raised by the Duke of Orleans to drive this pestilence of looting scum from the French countryside.

The Free Company army list is interesting because they have to be divided into commands based on their nationalities. They have access to some excellent troops, but disagreements between the various freebooter captains and a desire for loot above all else means the Free Company sequence deck is hampered by a Pillage and Loot card and a Command Indecision card.

The Early French HYW army list has some of the best mounted MAA available in the game, but their horses are only protected by cloth barding. Dismounting the French knights reduces their quality, but if you leave them all mounted versus so many longbows, a repeat of Crecy is inevitable. I compromised, dismounting 4 of my 6 MAA units.

My best knights, my retinue knights and nobles, laughed at the Duke's order to dismount and ignored him. Hopefully, the presence of the oriflamme at the battle might serve to inspire my troops. The French have a few cards: Uncontrolled Charge, Undisciplined Advance, and Courage that create situations where their cocky knights can act impetuously and unpredictably.

During the narrative, I don't describe every card that was flipped. Many cards were flipped during the game. I had a few good impetus runs that allowed me to run through the deck and pick my cards. We both had some terrible luck in combat, but my initiative luck was a little better than Greg's. 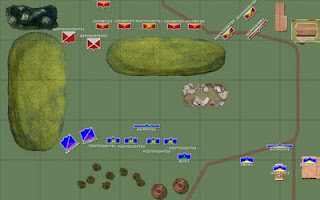 We determined the battlefield objectives on the table. All of the directions on the table will be described from my perspective as the French commander since I'm a self-centered bastard. On the right side of the table, there were two villages. The village on the Free Company side was worth 7 VP. The village on the French side was worth 14 VP. My command of common troops started the battle deployed in that village. I guess the local levies were holed up there defending against the invaders and the French knights were arriving to rescue them. In front of the center hill is an impassable rocky ravine. Behind the French center is a light woods and the tents of the French camp. On the left side of the table is a long hill with a swamp just above it. The Fee Company side of the hill is worth 15 VP. Why? Maybe that's where the Free Company has left their loot wagons or where a particularly valuable hostage is kept. 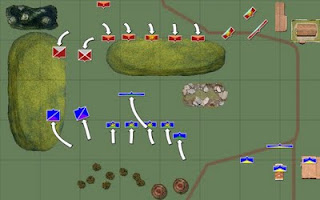 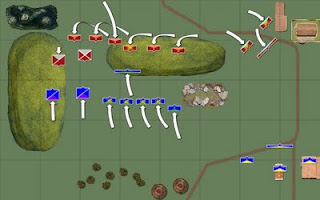 (ABOVE) At this point, my mounted retinue knights had climbed the hill and were heading toward the German knights who were also on the hill. My second mounted noble unit was thundering toward the gap between the two hills. The German spearmen facing me in the gap saw this threat and formed a hedgehog defense. In the center, my dismounted knights and the English longbowmen raced to be the first to crest the center ridge. 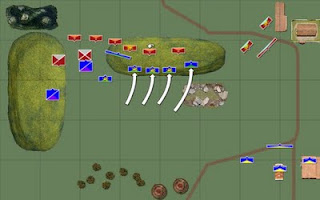 (ABOVE) My mounted nobles in the gap were fired on by a unit of longbowmen and they were disordered. Suddenly, I flipped an Uncontrolled Charge card from my sequence deck. This card states that any MAA who are fired at this phase immediately move toward the nearest enemy. The disordered nobles, their marginal discipline disrupted by the missile fire, charged the hedgehog of heavy German spearmen. 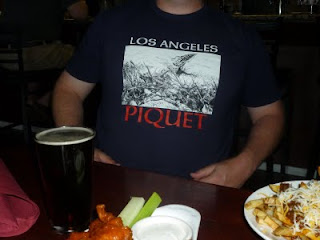 (ABOVE) LUNCH BREAK. Showing the colors at the local pub between turns. Newcastle, Piquet, wings, and chili cheese fries. 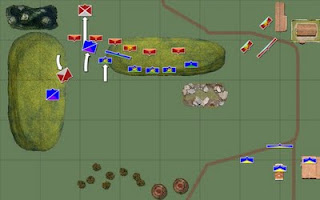 (ABOVE) By some miracle (Greg rolled a 1 on a d12 vs d6 combat), my berserker nobles overran the German hedgehog and sent the mercenaries fleeing for their lives. The enthusiastic French knights pursued after them and smashed into a unit of English longbowmen. Greg flipped the "Pillage and Loot" card from his Free Company sequence deck and his German knights decided to use the distraction of the battle as an opportunity to loot the French camp. The knights wheeled and tried to make a beeline for the tents on the bottom center of the table. 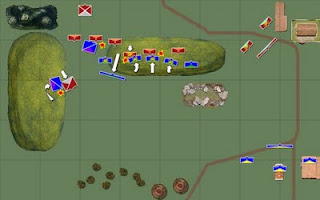 (ABOVE) Unfortunately for the greedy Germans, their urge for booty blinded them to the threat of the French retinue knights who were still on the hill. The finest mounted knights on the table wheeled, charged down the hill, and smashed into the extra-heavy German cavalry. On the center hill, the longbow fire was heavy but surprisingly ineffective as the French dismounted knights climbed the hill and battled the English company in melee. One longbow unit was routed from melee, but a unit of dismounted English MAA was able to fight off two units of French foot knights and send them tumbling back for their horses. So much for the oriflamme. 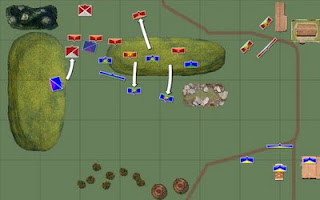 (ABOVE) At this point, the Free Company had run out of morale chips and the French still had 5 or 6. The French retinue knights defeated the German mounted knights and sent them routing from the table. In an upsetting turn of events, my battered mounted noble unit's luck ran out and it was destroyed in melee by a longbow unit. 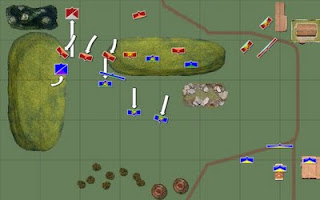 (ABOVE) The Duke of Orleans was attached to a foot knight unit in the gap between the hills and was killed by a lucky arrow shot that penetrated his visor (1 on a d20). Arrrrgh! His units of foot knights then pulled back from the gap after they failed a Courage! card check and became disordered. I moved the mounted retinue knights forward to drive the longbowmen off of the left side VP hill. My routing foot knights continued to flee until they found their horses and fled from the battle.

Greg then pulled a "Major Morale Check" card from his sequence deck. With no morale chips in the Free Company reservoir, I was able to roll a d20 for morale challenges. I rolled 16 morale challenges and Greg stated, "I'm done." With cries of "treachery!" the tenuous bindings of loyalty between the different companies dissolved under the pressure of battle. It was every man for himself and the Free Company fled to loot areas with less determined resistance.

We used the 1/3 rule for Initiative and it really produced a great game. Impetus was determined using a d20 roll off. The difference is the amount of impetus pips the winner gets. The loser gets 1/3 of that difference (rounded up) in impetus pips. The winner chooses whether the loser goes first or second.
Posted by Castigator at 7:00 AM 4 comments: