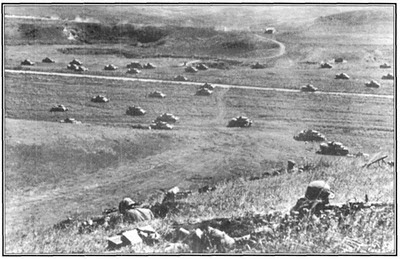 This will be an ongoing record of my first playtest of my Prokhorovka (Kursk) scenario using the Field of Battle: WW2 (FOBWW2) rules from Piquet.  The units are companies, the commands are battalions and brigades, and 3 turns (AM, PM, and Night) make up a complete day of fighting.

This is battle report is for Turn 3, the AM turn of July 11, 1943.  If you want to get more information on this battle and the scenario, search this blog for other articles with the same tags. 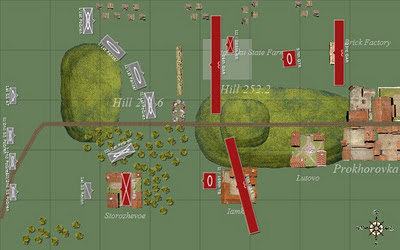 I'm still working on finishing all of the miniatures.  Once they're done, I'll focus on upgrading the terrain. I initially put the labels for the units behind the stands, but then I just taped them to the bottom of the stands.  The white backside of the labels just bugged me too much.

The Germans have been making good progress, but now they ran into the 9th Guards Airborne Division and its anti-tank defenses.  These defenses were less formidable than the defensive belts elsewhere in the Kursk salient, but they could still pose problems for the attacking SS armored units.

(BELOW) The 1st SS Panzer Grenadier Regiment arrived along with the division's AT Battalion.  The regiment consists of three battalions, each with three grenadier companies and a Stug company. 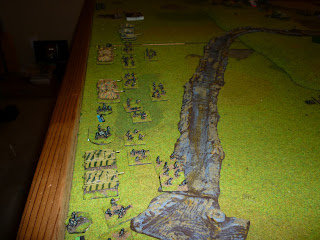 (BELOW) Soviet airborne infantry and anti tank guns were dug in on a defensive line anchored on the Oktiabrskii State farm. 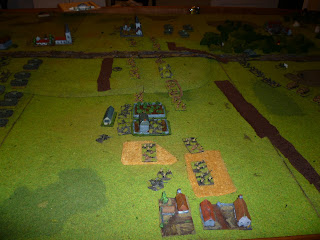 (BELOW) A panzer battalion prepared to assault the next village along the Psel River valley (north table edge).  The anti-tank ditch and anti-tank mine fields have been disovered by the Germans.  They are marked on the table by the brown cloth.  Suppressions are marked by the orange flames.  Smoke means a unit is unloaded (has already fired). 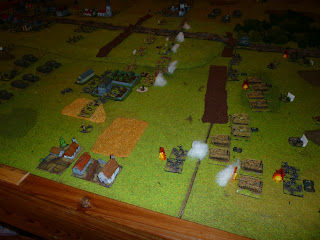 (BELOW)  The panzer battalion quickly occupied the village and the Germans now outflanked the Soviet defenses in the Oktiabrski State Farm.  Black smoke plumes are spotting rounds. 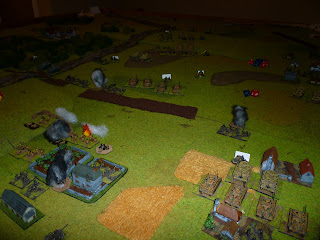 (BELOW) The other German panzer battalion blasted away at the farm's defenders from the opposite side of the AT ditch. 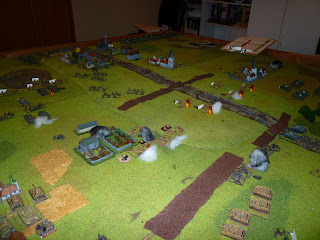 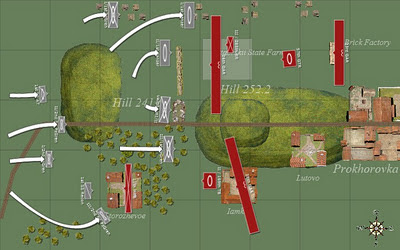 (BELOW)  The German division commander redeployed two battalions of the newly arrived panzer grenadiers to lend extra weight to the assault on the northern farm's defenses.  The Germans won initiative 11 to 1 and were able to flip ten cards in a row before the Soviets could flip their ten cards.  The Germans rolled especially well when they rallied their units and were able to get most of their units back into the fight and recover/repair damaged tanks. 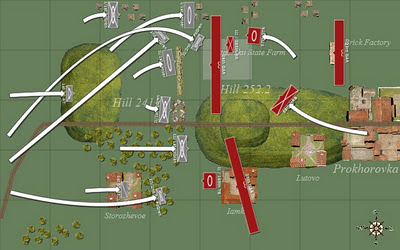 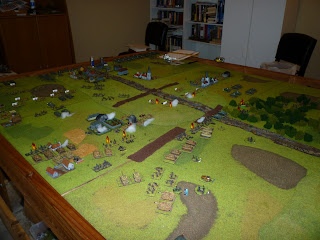 (BELOW)  A view of the German reinforcements from the Soviet perspective. 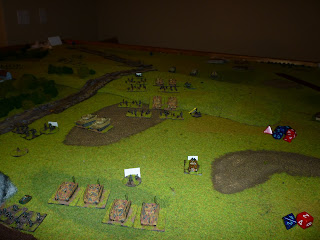 (BELOW)  A Soviet airborne regiment and a KV-1 regiment waited behind the state farm to support the defenders. 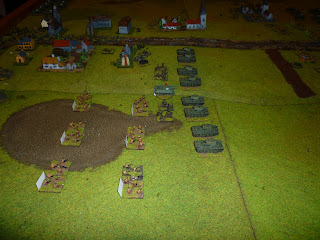 (BELOW) Meanwhile, on the opposite (southern) side of the railroad embankment from the farm, more airborne infantry and T-34 tanks from the 169th Tank Brigade enjoyed some quiet time in their defensive positions. 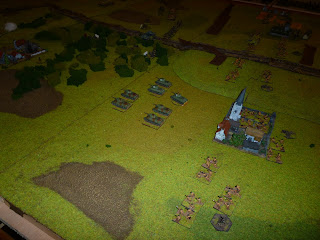 (BELOW)  As the fresh 1st SS panzer grenadiers attacked the Oktiabrskii State Farm complex, the KV-1 regiment lumbered forward to support the defenders, but two consecutive German air support cards wiped out half of the regiment with devastating Stuka attacks.  Vicious fighting around the farm destroyed a company of panzer grenadiers and several Soviet infantry companies. 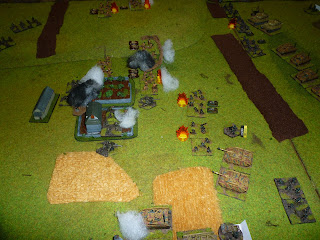 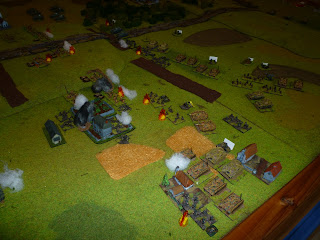 (BELOW) In the center of the battlefield, the German grenadiers began clearing some of the minefields.  They received heavy fire support from the Tiger company and other German armored forces.  The Soviet defenders suffered multiple suppressions and strength point losses. 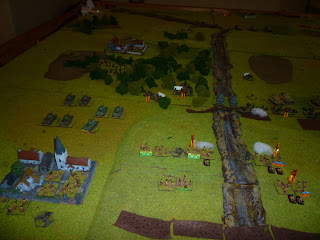 (BELOW) A view from behind the Soviet north half defenses.  The 58th Motor Rifle Brigade is arriving on the bottom edge of the photo and establishing hasty defenses behind the battered airborne division. 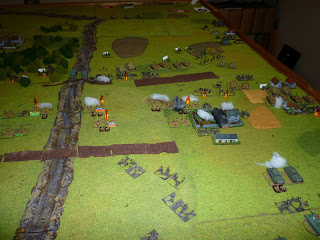 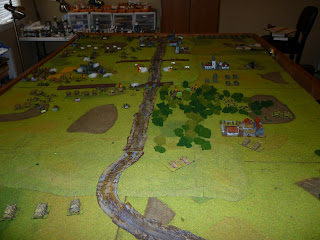 (BELOW)  Long view of the battlefield from the Soviet edge.  The Soviets need to hold on through the next turn (11 July PM).  After that, 2 Soviet tank corps arrive with enough combat power to punish the Germans. 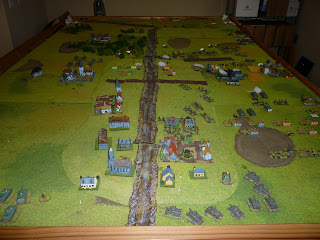 The AM turn ended when both sides tied their initiative die rolls.  The Germans made great progress during the morning, but at a pretty high cost in resources, equipment, and manpower.  They would really be doing great if they could get a foothold in one of the city sections of Prokhorovka itself next turn!

Several Soviet brigades have run out of morale points and have to check morale whenever the Morale card appears.