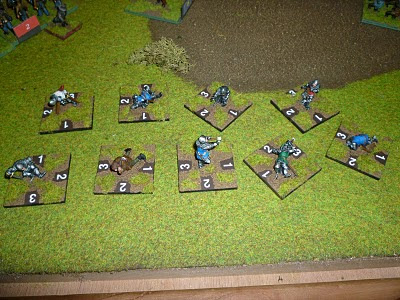 In Piquet, you don't usually remove stands when a unit is damaged. You just mark it for stand loss until the unit is destroyed. Each lost stand reduces the unit's effectiveness by reducing the type of die it rolls.

These are some Old Glory casualty markers I made for my Piquet: Band of Brothers games. I prefer to minimize the markers that are on the table, so I try to use as many miniature markers as possible to add to the overall look of the table. I use similar markers for American Civil War games. The markers don't take long to paint, but they're usually a big hit with the players.

These figures are from the very nice Old Glory casualties set. As you can see, the figures have plenty of character. The Old Glory medieval figure line is pretty good with only a few bad poses, and the great price means that even the few bad poses can be discarded or salvaged as markers. This particular set also includes two knights on fallen horses, but I couldn't fit them on my bases, so I'll save them for another marker. Any ideas?

I also bought some Perry casualties, so I'll use them as similar markers. 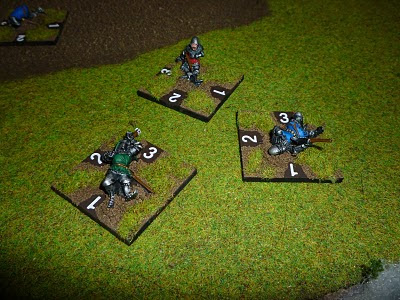 (ABOVE) Ouch! The green knight caught an arrow right in the head! 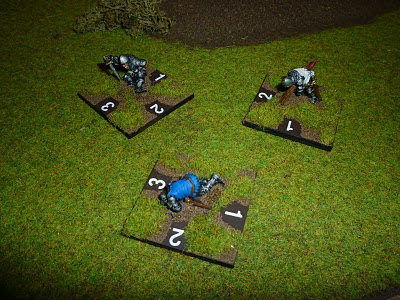 (ABOVE) This trio is awesome. The white knight is impaled on a wooden stake. The knight next to him is pushing himself up with his sword, "It's only a flesh wound. One more charge and we have them." The blue knight is definitely "routed unrallyable". 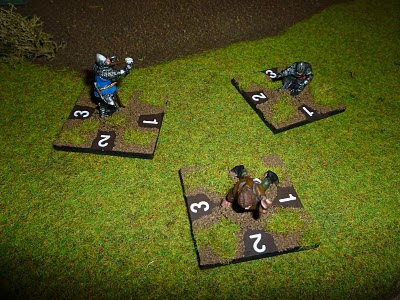 (ABOVE) Blue knight caught one right in the throat/mouth. And finally an archer casualty at the bottom.