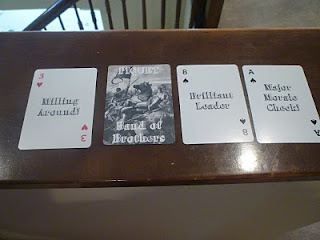 One of the most important parts of Piquet is the use of Sequence cards to dictate the action in the game. Each army has its own Sequence Deck which reflects its particular strengths and weaknesses. You can only move your cavalry when the you flips your Cavalry Move In Open card. You need a Melee Resolution card to fight a melee. You need a Missile Reload card to reload your bowmen. Each historical supplement comes with sheets of cards you can cut out to make up these Sequence Decks. I laminated my cards and they are good enough to game with, but I was concerned they might become worn out after a lot of gaming.

I think I first heard of a website named artscow.com on the Too Fat Lardies Yahoo group. This company allows you to custom design decks of playing cards with any images or writing you want. You can even choose to remove the poker suits and symbols from the cards, but I opted to keep them so I could use the cards for Band of Brother's "Beat the Drum" army generation rules.

I chose a black and white picture for the back of the cards because I liked the image, but you can use color images. It also makes the deck a little more neutral and easier to use for any army.

When I tried to use jpg files, the card designer program warned me the images might not have enough resolution, so I used a bmp file I found on the internet instead. The deck cost about $12-$15. The cards are durable and comparable in quality to a real poker deck. 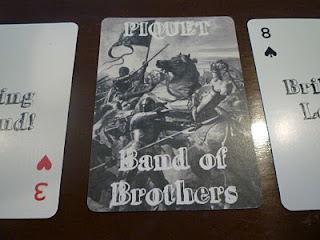 (ABOVE) Close-up of the card backs. 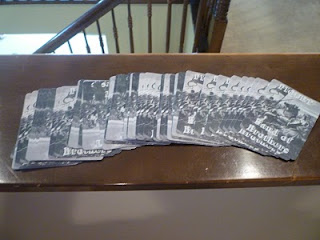 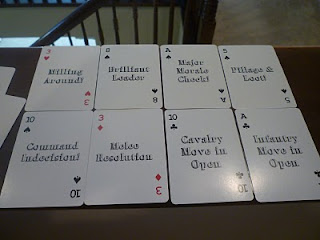 (ABOVE) Here are the fronts of the cards. I put exclamation points on those cards which have bad effects. I originally wanted to include an explanation of what each card allowed in smaller font below each title, but the card design program wouldn't let me have more than one font size on the front.
Posted by Castigator at 3:35 PM