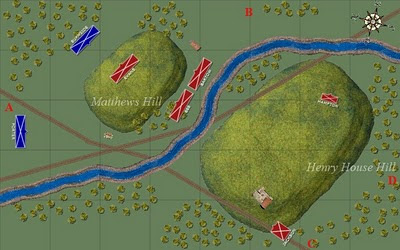 "You are green, it is true, but they are green also; you are all green alike."
Abraham Lincoln to Brigadier General Irvin McDowell
The first battle of Bull Run was the first major American Civil War battle that took place in the eastern theater between large armies. Both armies largely consisted of green volunteer infantry. The Union did have a few regular US infantry units and artillery batteries from the United States' standing army.

The Confederate forces were defending the southern side of Bull Run, a creek that was crossable at a large number of bridges and fords. The Union army was based at Centreville, just north of Bull Run. General McDowell, the Union commander-in-chief, sent a flanking force that crossed Bull Run west of the Confederate left flank. By the time the Confederates were aware that the Union had crossed over Bull Run, their left flank was in danger of being turned by a large Union force.

The Confederate brigades of Evans, Bee, and Bartow were defeated on Matthew's Hill and fled behind Henry Hill. Jackson's "Stonewall" Brigade made a stand on Henry Hill supported by Confederate artillery and repulsed all Union attempts to drive them off. General Joseph Johnston rushed reinforcements to the threatened flank and the bolstered Confederates were able to rout the Union forces and drive them back.

The Confederacy had passed its first major test of arms and the legend of Stonewall Jackson was born.

This scenario begins on July 21, 1861 at 10:00 am. The Union are approaching Matthew's Hill which is defended by Evans' brigade. Evans has requested the assistance of Bee and Bartow.

The scenario is designed for battalion scale Hallowed Ground, a Piquet supplement. At this scale, the units are regiments, battalions, and batteries. The commands are brigades.


Battle rosters for each side and the map are stored in the Hallowed Ground folder in the Files section of the Piquet Yahoo Group.

PIQUET NOTES
I determine the armament of my infantry units when I make the Troop Quality Check for each unit. I roll a d10 for each unit and if I roll a 3 or less (Confederates) or a 5 or less (Union) the unit is armed with rifled muskets.

The battle is a large battle and I recommend using two Sequence Decks per side. The Union forces should use two Poor decks and players can split the brigades between themselves based on table location. The Confederate players should use two decks. One deck should apply to Jackson's Brigade and the independent units and should be Superior. The other Confederate deck should apply to the other brigades and be Average.

This is the battle where "Stonewall" Jackson and his brigade earned their famous nicknames. Units in Jackson's Brigade add +5 to their Quality rolls before the battle.

A special Stratagem card should be added to the Confederate Sequence Deck: "Don't shoot! Those are our boys!!" Once flipped, this card is removed from the Deck and held by the Confederate player. The card can be discarded at any time to unload any Union unit of the Confederate player's choice. This card recreates the uniform confusion during the battle caused by the similarities between the uniforms worn by both sides at this early point in the war.

Players might want to add a Ragged Volley or Undisciplined Fire card to each deck to simulate the lack of musketry training of the newly recruited militia infantry regiments. The cards should only affect militia infantry units.

Independent Confederate units enter the table out of command. Only Jackson can assert command over independent units. They then become part of his command.

The creek and woods are all Class II. Both hills are Class II hills. Henry Hill is a plateau worth 8 morale chips to the last player to completely control its top. The hill is flat on top and any unit on Henry Hill can see any other unit on the same hill as if they were on the same level of elevation. Intervening units can still block LOS.

I also put rail fences along the sides of the road that runs from Entry Point A to Entry Point C. It's possible that both of the major roads were lined with rail fences.

The Union player should push the tempo early and use his early numerical superiority.

The Confederate player should decide early where to make his stand and hold on for dear life (HINT: Follow Jackson's example.). Help is coming! Also, it might be a good idea to position your artillery on Henry Hill. Artillery placed on Matthews Hill might not ever be seen again.

Subtract the Union morale chip total from the Confederate total.