This is my second playtest of the Antietam scenario posted on this blog. I've been annoyed in the past by scenarios I tried that obviously weren't tested out by the authors, so I've committed myself to testing each scenario as least three times. It would also be great if any gamers who play these scenarios leave me comments or suggestions on how the battles went.

I used Piquet and the Hallowed Ground supplement to fight this battle. 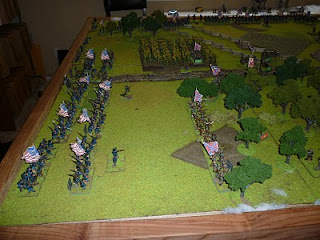 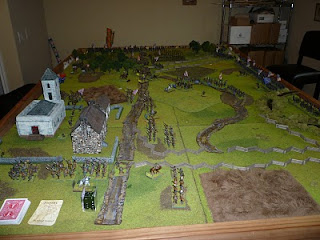 (ABOVE) View from the southern end of the battlefield. 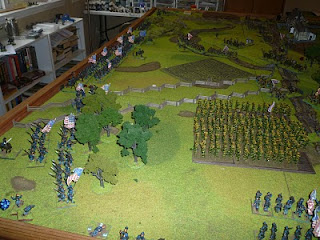 (ABOVE) Union troops under Mansfield (near left) and Sumner (far left) threaten the Confederates from the eastern edge of the battlefield. 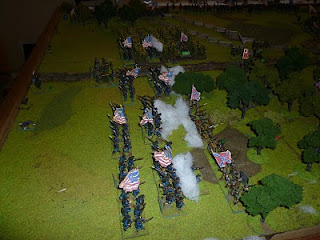 (ABOVE) By Turn 3, Hooker's 1st Corps is heavily engaged with Confederate brigades from JR Jones' and Lawton's divisions. The Confederates begin to crack as one brigade (BELOW) routs from the heavy musket fire. 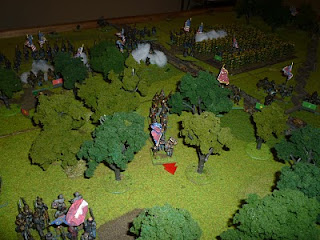 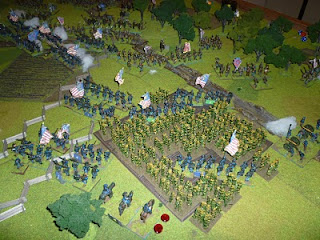 (ABOVE) Turn 4 saw the Union gain a lot of impetus. Mansfield and Sumner both organized their commands and pushed them into battle. Mansfield and Hooker pushed the Rebels out of Miller's cornfield. 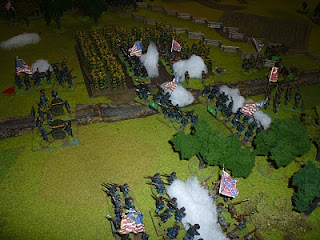 (ABOVE) Hooker kept the pressure up and drove JR Jones out of the West Woods. The Confederate left flank was in danger! 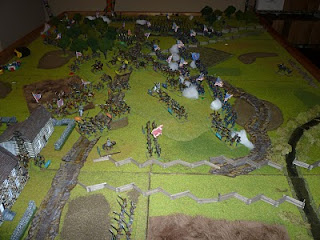 (ABOVE center right)) Meanwhile old Bull Sumter did his part and his giant Union corps drove DH Hill from the Sunken Road. 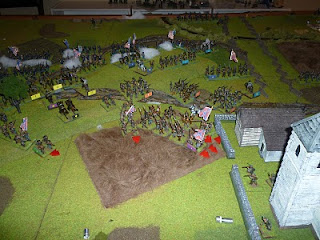 (ABOVE) Confederate troops fleeing from the West Woods and the Sunken Road for the safety of Sharpsburg. 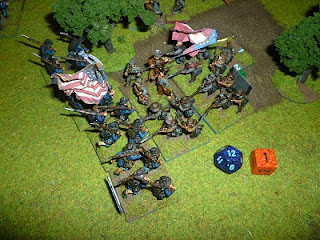 (ABOVE) Lee sent Hood's Division into the West Woods to stabilize the Rebel left flank. The Texas Brigade met its match against the Union's Iron Brigade. It was beaten 12-1 in Shooting and routed. The woods were threatened by these tough Westerners (BELOW). 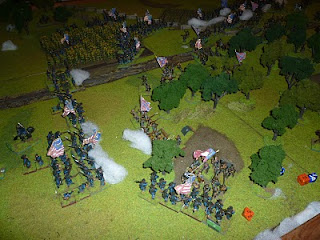 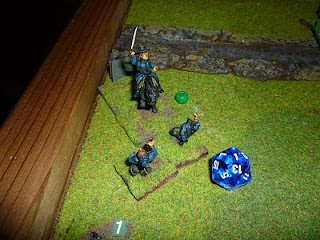 (ABOVE) Things were really looking great for the Union when suddenly a sharpshooter from Hampton's Legion dropped General Hooker with a long shot. Without the leadership of "Fighting Joe", the 1st Corps went out of command and its attack stalled long enough to give the Confederates a little breathing room. 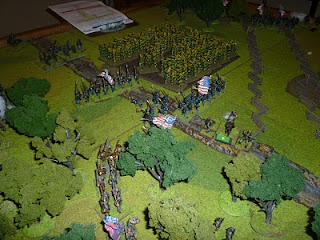 (ABOVE AND BELOW) Just in time since Hooker's troops had driven both defending Confederate divisions from the West Woods and the Cornfield. 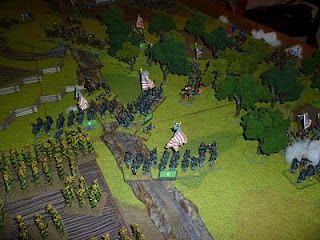 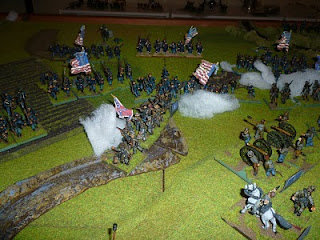 (ABOVE AND BELOW) Lee sends in D.R. Jones' Division to hold off Sumter's Corps in the center. 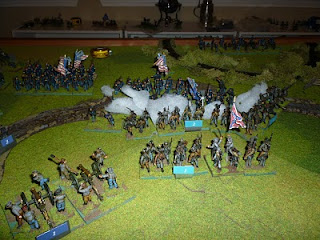 (BELOW) Turn 8. Meanwhile the Confederates flipped an Officer Check card and used 12 Impetus to rally most of JR Jones Division and the Texans. Although weakened, these troops were enough to slow the momentum of Hooker's Corps which was still recovering from the loss of its commander. 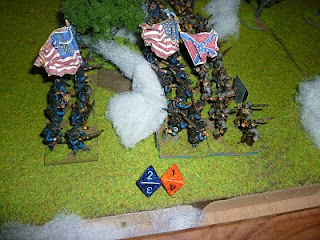 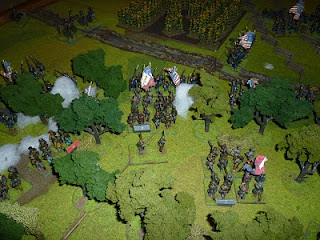 (BELOW) Union brigade flees from the West Woods past an artillery battery. 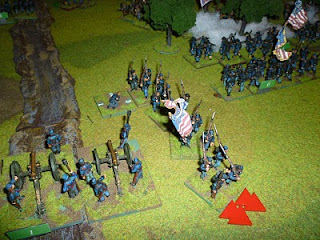 (BELOW) By Turn 9, both side were pretty exhausted. Hooker's replacement was prepared to push hard against the brittle brigades Jackson had rallied and sent back into the woods to oppose him. 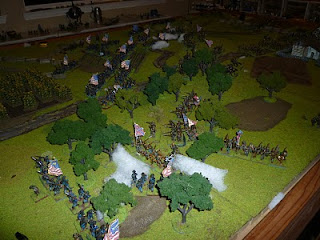 Unfortunately for McClellan, two quick turn ends (variable turn length) quickly ended the game. Sumner and Hooker were both low on morale chips, but the Confederates were much worse off. Lee had no morale chips left and 4 of his divisions were also worn and just hanging on. Neither AP Hill nor Burnside arrived. Burnside would have been enough to really slam the Rebels since his 8 brigades would have only been opposed by Walker's two brigades and artillery. But old Burnsy was still screwing around with his bridge.

Overall, the battle was a marginal Union victory. The Union received the victory points for the Sunken Road and inflicted some severe damage on Jackson's troops on the left flank.

After two playtests with no appearance by Burnside, I've adjusted the requirements for him to appear. He should appear SOME of the time. This why I playtest these damn things. :)
Posted by Castigator at 9:27 AM