This was the first non-solo playtest of my Kursk: Drive for Prokhorovka scenario using Piquet's Field of Battle: WW2 (FOBWW2) and 10mm miniatures.  4 gamers arrived to play.  After some brief explanation, we were started at approximately 9:45 a.m.  We broke for lunch from 12:30 to 2:00 p.m. and halted the game around 6 p.m.  So, approximately 6 hours of gaming in total. 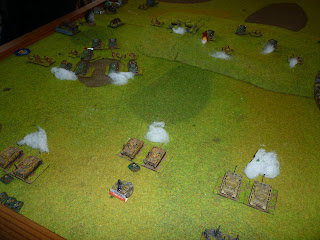 (ABOVE)  The scenario starts on the PM turn of July 10, 1943. Although the panzer grenadiers made excellent progress on the south side of the battlefield, the Soviet 99th Tank brigade launched itself out its village defenses and conducted a spoiling attack against the German 1st SS Panzer regiment in the north.  While the attack was eventually defeated, it did inflict heavy damage on the already battered German panzer companies. 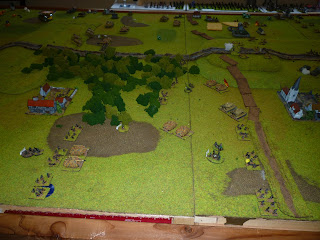 (ABOVE) We stopped the game after the completion of the 11 July PM turn.   This photo is from the south side of the battlefield. The Germans made great progress on the south side of the railroad embankment.  They have captured Storozhevoe and the Storozhevoe Woods (upper left).  The German Tiger company  and some assault guns are stopped at the Soviet minefield belt and the anti-tank ditch.  The German pioneers are working to fill the ditch in.  Meanwhile, a panzer grenadier battalion charged across the AT minefields and captured the town on the upper right.  The defending Soviet Guards airborne brigade in this sector failed its morale check and routed.  The Soviet defenders rushed units into this sector to hold off the Germans.  Only nightfall slowed the German advance. 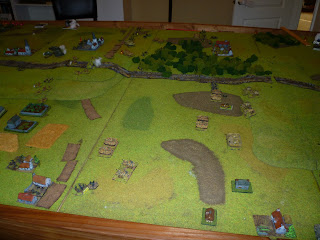 (ABOVE)  The north side of the battlefield at the end of the 11 July PM turn.  The German panzers and infantry have captured the Psel village in the lower left.  The Soviet rifle battalion defending the Oktiabrskii State Farm in the middle left fled under heavy fire and abandoned its defenses in the farm complex.  Two Soviet airborne brigades still man their trenches in this sector. 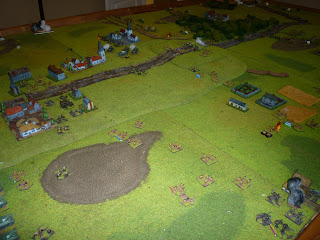 (ABOVE)  This Soviet Airborne brigade is dug in guarding the north side of Prokhorovka. 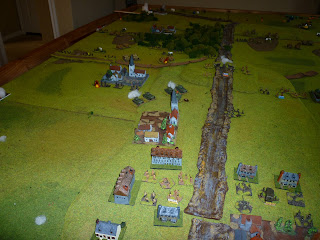 (ABOVE) The battered Soviet defenses south of Prokhorovka.  Two infantry battalions are deployed in the city itself.  Meanwhile, in the upper part of the photo, the 57th Guards Tank Regiment sacrifices its KV-1 tanks in an effort to slow the German advance. 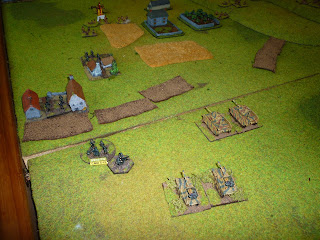 (ABOVE) Here is a typical SS Panzer Grenadier Battalion.  The circle stand is the command stand.  The hex stand is its Heavy Weapon marker.  A Marder AT company and a Pz IV tank company are attached.  Two PG infantry companies are deployed in the village in front.  You can tell they're deployed in the village because they only have one stand.  Once they leave the village, the infantry companies will spread out with two stands each. 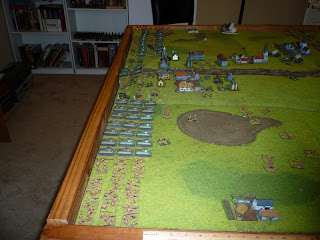 (ABOVE) Now that the 11 July Night turn has begun, the Soviets receive massive reinforcements from the 5th Guards Tank Army.  These are the troops whose attack on 12 July 1943 made this battle so famous.  I've laid these brigades out to prepare for their deployment on the north side of the battlefield.  Here are three Soviet tank brigades ready to enter the table once the Night turn begins. 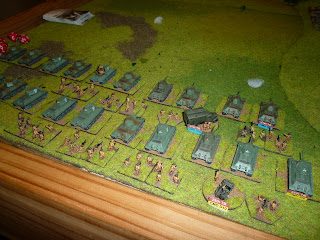 (ABOVE)  Two more tank brigades will move out to stop the Tiger company and its friends south of the embankment.  I'm going to hold 2 tank brigades and 2 motorized rifle brigades off the table until I see how things go.  One tank brigade might come on behind the German flank.  The others I might save until the AM turn of 12 July.  Then I can feed them in to whichever sector they are needed.  I also don't want to end up with most of my tanks jammed behind my own anti-tank defenses.

It's a tough decision for the Soviets because while I have tons of tanks available (7 total brigades), once they're gone, that's it for me until the end of the game on 15 July.  I really have to make sure that these fresh tank formations do enough damage to cripple the 1st SS Panzer Grenadier Division.

Posted by Castigator at 9:50 AM