The Rules for Agincourt Part 1 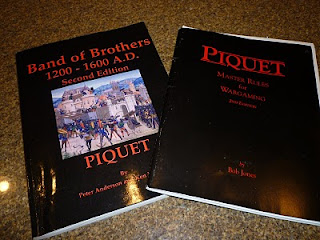 One of the biggest questions for entering a new period of gaming is usually what set of rules you plan to use. Many rules vary as far as how they want the figures based and no one wants to re-base their figures after they decide they don't like the rules they chose.

The two pre-gunpowder rulesets I've played the most are Might of Arms and Warhammer Ancient Battles (WAB). Might of Arms is a great set that is well-suited for large scale battles. WAB plays well at more of a skirmish level, but we've enjoyed using it for our Dark Ages games.

The other set I've always looked at with interest is Piquet. As I've become a more experienced gamer, I've started to prefer rules that better reflect the command confusion and friction of war. Generals in the pre-radio days didn't have precise control over the movements of their troops. This was probably never more true than at Agincourt.

The French were faced with some major command and control problems at Agincourt:

1) There was no clear leader in charge. Due to the political turbulence in France, neither the King nor his son were present at the battle. The French were instead led by the Constable of France, but the reality was that the Princes of the Blood present were just not going to listen to him.

2) Commands were often assigned by noble rank, not ability. The highest ranking nobles were given the best commands, regardless of their talent. As more big-wigs showed up at the battlefield, the command structure had to constantly change. There was no set unit structure. Troops were lumped together into commands and units as they arrived at the battlefield.

3) French leaders fought in the ranks. The leaders were attached to the units and fought in combat. They didn't sit back to direct the fighting. As a result, once a leader's unit became engaged in melee, you could forget about his ability to direct his command.

4) Some of the French nobility still hated each other. Some of the nobles had previously fought each other in the very bitter war between the Duke of Burgundy and the ruling Armagnac party. The level of trust was so low between the two groups that the Duke of Burgundy was told by the King to send his vassals to the muster, but stay home himself. The French weren't sure whose side he would fight for if he showed up on the battlefield. Burgundy ordered his own vassals to not respond to the King's call for troops. Now they were expected to cooperate with each other?

So, this is obviously a bad situation for the French. In contrast, the English were led by Henry V. Henry was charismatic and definitely in charge. His subordinate leaders were loyal and competent. His troops were also badly outnumbered, deep in enemy territory, and they knew they had to win the battle or they would never see England again (unless they were rich and paid a ransom). This makes for a motivated force.
Posted by Castigator at 3:08 AM