One of the nice things about the Piquet rules is that the pace of the game is largely dictated by what cards you draw from your deck during a turn. This means the rules are very easy to play solitaire. This is a play test of my Agincourt game I ran in my game room solitaire over the weekend. Not all of the figures are painted yet, so there's no photos. I used empty labeled bases for those units which I haven't completed. For you Piquet experts, the Men At Arms are in Battle Mass Formation and the longbowmen are all in Chevron formation. 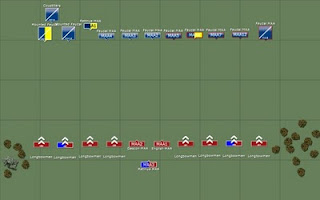 The above picture shows the armies deployed for battle. Each army has three commands. each command has a commander attached to a unit within it. Men at arms are basically armored knights. They sometimes fought mounted, but by now, they often dismounted to fight because the English archers were great at shooting their horses out from under them.

The English (Red) are at the bottom of the battlefield. They are on a slight rise with woods anchoring both flanks. The center command is made up of dismounted MAA. On each flank is a command made up of longbow units. 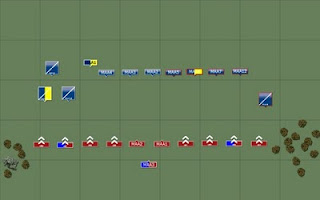 (ABOVE) You can see the French beginning their advance. The French won Impetus three Initiatives in a row and really made good use of that Impetus to close the distance between the two armies. The English longbow units fired at the mounted MAA units on the flank with long range volley fire.

Volley fire is used instead of direct fire when the longbow units units lift their bows to the sky and rain arrows from above on their enemies. This increases the range of the bows with a corresponding decrease in penetration and effectiveness.

This volley fire caused no casualties, but when the French drew their Uncontrolled Charge card, the mounted MAA surged ahead to come to grips with the missile units firing at them. Just the beginning of disaster for the French plan, if there was one...a plan, I mean...did I mention they were bad at plans? 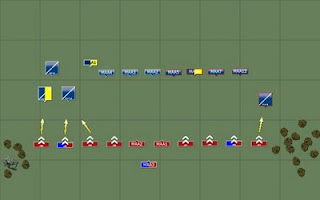 (ABOVE) You can see the longbow units firing at the mounted MAA as they ride toward the waiting English defenders. The longbow units are behind sharpened stakes, so the cavalry need two Cavalry Move in Open cards to engage the longbowmen. Dismounted units can ignore the stakes. 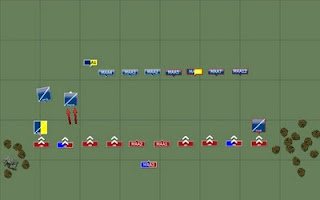 (ABOVE) One of the right flank French cavalry MAA units lost two stands to longbow fire. The English then made a tactical morale challenge against the French, the French unit was tripled ( 6 to 2) in the challenge, and routed unralliable.

The other two charging mounted MAA units benefited from the following awesome 4 card flip: Uncontrolled Charge, Cavalry Move in Open, Heroic Moment, and Melee Resolution. A perfect draw that pushed the cavalry over the stakes and into the longbows with a shocking crash of armor and horseflesh. 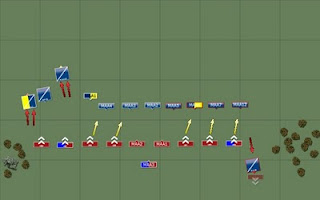 (ABOVE) The French left flank mounted MAA unit used the Heroic Moment card to increase its chances in its melee. It fought with a d12+3 vs. a d6 and routed its longbow opponent. Unfortunately the enthusiastic French knights failed their Pursuit test and chased the routed archers off the table and into the English baggage train, never to be heard from again.

On the French right flank, the mounted French knights rolled an unlucky melee tie with the archer defenders. d10 vs. d4 resulted in a 2 to 2 tie. The French were the losers in the tie because their base Morale die (d4) was less than the English base Morale die (d6). The English then declared another Tactical Morale Challenge (d4 vs. d4). The French lost the roll 4 to 1, tripled, and routed unralliable.

The French mounted MAA units on the right flank have bad Morale dice. Historically, they were poorly led and badly organized. Many of the knights were a mix of the Armagnac and Burgundian parties and these rivals hated each other. So, they are better than the English archers at Melee (usually modified d10 vs. d4), but they fail Morale checks when things go badly. (ABOVE) At this point, the French mounted MAA units are all either routing or pursued off the table, so it looks like it's up to the dismounted French knights to get the job done.The English won Initiative, won 18 Impetus pips, and fired a ton of longbow shots at the French knights trudging through the mud.

This missile fire ended up routing 4 different French units who continued the trend of rolling a "1" for all of their Morale checks. One of the fleeing units included the Commander in Chief's unit which lost two out of four stands to a 7 to 1 longbow shot. 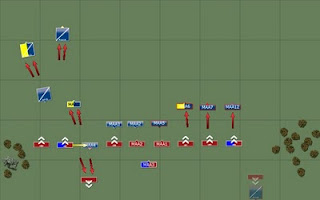 (ABOVE) The longbow unit on the English right flank was a mounted longbow unit led by an English lord and his retinue. They outfought their French opponents who were obviously tired from their long stroll across the table (d4 base die).

On the English left flank, the French dismounted knights crushed their English opponents, sending them fleeing to the rear. The victorious French again pursued and received a point blank longbow shot into the flank from the longbow unit next to the newly created gap. They lost three stands (10 to 1 shot) and fled unralliable back to where they parked their horsies. 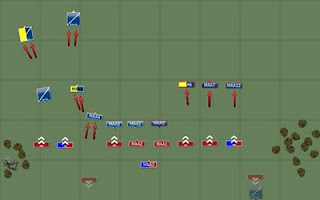 At this point, the battle is pretty much over. The French still have morale chips left, but with many of the units badly damaged and fleeing, there doesn't seem to be much hope for them. The dismounted French MAA still in the fight are opposite the English dismounted MAA who are more than a match for them.

It might not seem like it, but it was definitely a close contest. There were moments when I thought the English line would be broken and the French would be victorious. The English benefited from atrocious French dice on Morale Challenges and defense rolls vs. missile fire.

Great game. And Henry V never had to swing a weapon in anger.

Posted by Castigator at 4:07 PM