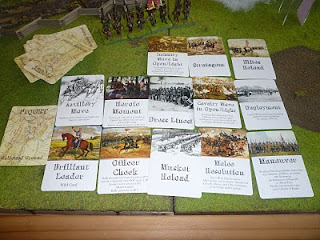 I recently purchased Theater of War(TOW) and Hallowed Ground(HG) from Piquet. TOW is a campaign system designed for use with Piquet. HG is designed to wargame battles from the Mexican War to the Franco-Prussian War in 1870. I plan to use it for my American Civil War armies.

TOW uses the existing sequence decks for Piquet armies of any historical period and converts them into campaign decks that are used to march your armies on the map at a higher strategic level. When armies become engaged in a battle on the campaign map, the rules then use the armies' sequence decks to generate:

One of the nice aspects of the TOW rules is you know how many units you will need to have painted before the campaign begins. A formula calculates the size of an army's campaign roster based on the quality of the army's sequence deck.

My campaign is an 1862 Eastern Theater ACW campaign. Using the TOW rules, the Confederates get 18 units on their campaign roster. The Union army gets 28 units on its campaign roster because its deck is poorer in quality.

We used a roster for the units and didn't roll for their quality until they saw action. This adds some fog of war to the game because you don't know how good your troops are until they "see the elephant." I actually rolled very well for troop quality with some minor exceptions.

The commander of the Union (played by Greg) is McClellan (ABYSMAL skill) while the Rebel commander (played by yours truly) is R.E. Lee (SUPERIOR skill).

Hallowed Ground is actually 3 rule sets in one. It allows you to game at three different tactical levels:
For this game we will be using the Grand tactical rules, so each unit is a brigade. This battle will represent a full battle between the Army of Northern Virginia and the Army of the Potomac. 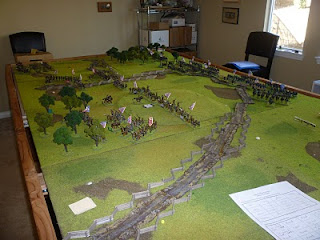 (ABOVE) Here's the battlefield that was generated. The Confederates deployed on the left long side. The Union on the right long side. The hill in the Confederate center is Preacher's Knob. It is worth 4 morale chips to the occupier. In the far Confederate left corner is a swamp that overlooks a road that leads to the Confederate line of retreat. It is worth 8 morale chips. In the Union right flank corner is a Class II woods worth 11 victory pojnts. In the Union left flank (off picture) is a swamp worth 5 victory points. 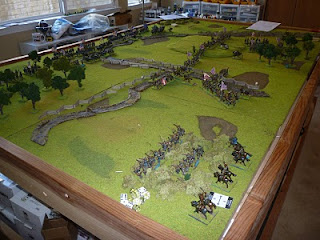 (ABOVE) The Confederate left flank. Dismounted cavalry is deployed in the swamp to protect the Confederate line of retreat. Unfortunately I rolled a POOR commander for them. That might come back to haunt me. 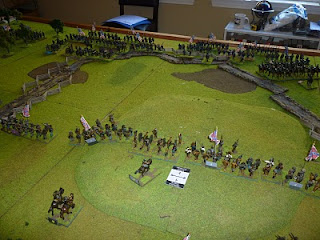 (ABOVE) My Confederate center, on top of Preacher's Knob, is occupied by Hoods's division. It's my best division led by Hood, a SKILLED commander. 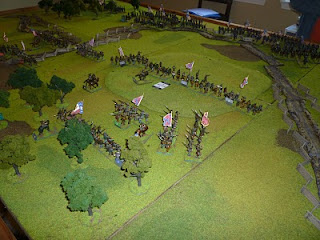 (ABOVE) The Confederate right flank is guarded by Johnson's Division. A.P. Hill's Division is resting in the woods behind Preacher's Knob as the army reserve. 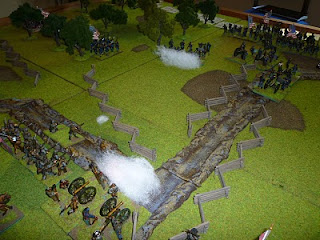 (ABOVE) The battle begins as artillery from Anderson's Division duels with the Union Artillery Reserve. 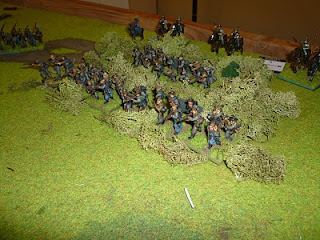 (ABOVE) Wheeler's dismounted cavalry stares across open ground on the Confederate left as Hooker's Union 1st Corps emerges from the woods opposite them (BELOW). Where is JEB Stuart when I need him? 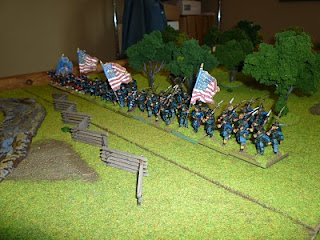 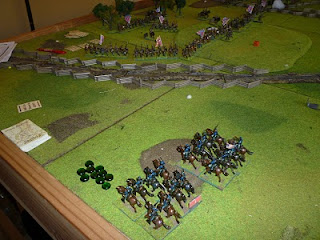 (ABOVE) McClellan (Greg) elected not to dismount his cavalry. He sent them riding around in a wide sweep to attempt to get behind the right flank of the Confederate position. 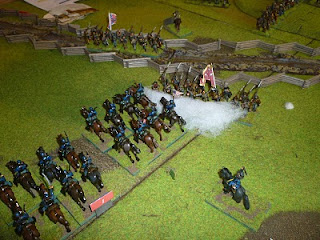 (ABOVE) Unfortunately for the Union, I then pulled 11 Impetus. This allowed Johnson's Division to advance and one of his infantry brigades unleashed a terrible volley into the flank of a cavalry brigade. This volley devastated their mounted ranks and led to a rout by that brigade. (BELOW) Also, ATTENTION!!! ATTENTION!!! If you look at the smoke in the picture below, you can see one of my LED flashers in the smoke fired by the infantry. If you haven't started using them, I recommend them highly. They make the units look like they are firing with flashing yellow lights lighting up the smoke. The LED flashers don't usually show up in the photos, so I'm excited. 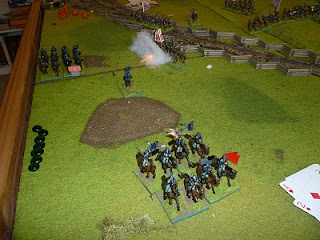 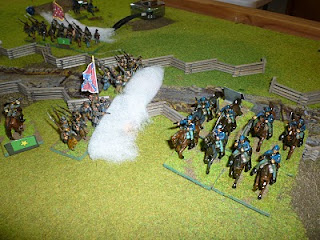 (ABOVE) Greg's cavalry commander (Custer?) was not to be discouraged by this result and he continued on his ride around the Confederate right flank. Here one of Johnson's brigades is again shooting into the remaining cavalry brigade's flank. The brave cavalry brigade took casualties, survived(!?!), were meleed in the flank, won the melee(?!?!?), routed my infantry(??!!?!?!), pursued, until they were finally finished off by a volley from the second line of Johnson's Division. Not a bad ride. 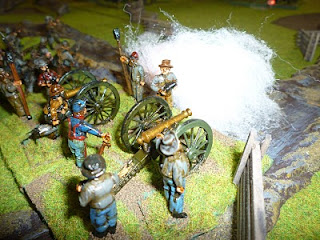 (ABOVE) Yeah, I know the gunner is in Union uniform. Maybe it's a militia uniform. It is 1862. 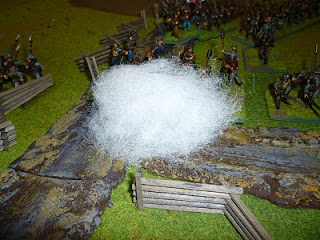 (ABOVE) Here's Greg's view of the same gun. His artillery must have taken ten shots at this battery. 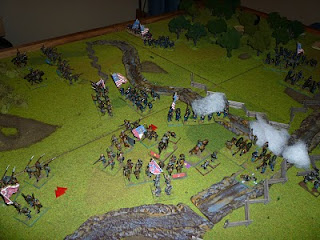 (ABOVE) The Union launched Hooker's I Corps from the woods into an attack against the Confederate left center. Greg ran off a string of 30 to 40 Impetus in a row and two of his brigades smashed into an elite Louisianan brigade and a fiesty Floridian brigade. The Texans turned out to be tired (rolled a 3) and the Floridians were determined (rolled a 20). None of it mattered and the Union routed both brigades. 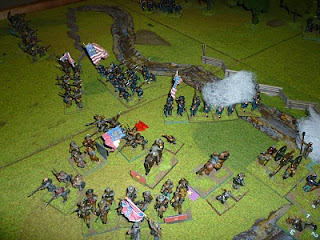 (ABOVE) Anderson attempts to rally his units as the routed flow around him like an unstoppable wave. 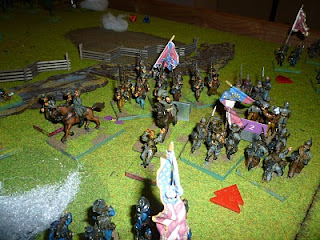 (ABOVE) Close up of the shot. This reminds me of Bragg attempting to rally his army as they ran off Missionary Ridge.

Greg had to leave just as he was starting to win, so I plan on leaving the game set up so we can finish it at a later date.
Posted by Castigator at 6:03 AM