I went to Historicon this year and had a chance to watch a great Napoleonics game put on by Architects of War and the Perry Brothers. While I watched the game with great admiration, I suddenly saw one of the players put smoke in front of one of the units. The smoke had little flashing lights inside of it that made it look exactly as if the troops were firing their muskets.

I was very impressed by the effect these smoke markers created on the table. You put a few flashers behind a strip of pillow batting (filling for pillows available in cheap large bags from JoAnn Fabrics) and you have your gunsmoke. It gives the battlefield a very active look as if combat is occurring even in areas where the player action is not focused. For Piquet, they make great markers to indicate unloaded units who have fired.

Almost immediately after getting off of the airplane from Pennsylvania, I emailed Architects of War and asked about the lights. They told me the lights were LED flashing lights. An extensive search on the internet found two websites that supplied them in a variety of colors.

They're called a variety of names like "LED blinking round body pins". Apparently they are used for rave parties.... Whatever.

The LED flashers are thimble-sized metal cylinders with a magnetic bottom. You pull out a small paper tab, twist the bottom half, and they begin to flash two different colors. Don't lose the paper tab because you can reinsert it into the flasher to keep it from accidentally lighting up. They give off no heat and come in a variety of color combinations.

Red/Yellow works great for tank fires, cannons, and building fires. I prefer Yellow/Yellow for musket fire. Other colors would work great for sci-fi and fantasy. Yellow/Yellow is actually hard to find. 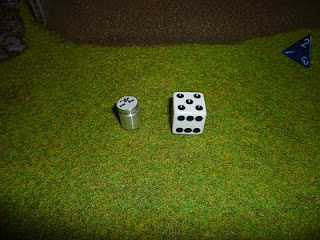 I made a video to show how the lights can look on the battlefield. Obviously, it's hard to see them in a photo. I lowered the room lights a bit so the flashers are more visible. It makes them a little more "flashy" in the low light, but in good lighting, the flashes look more like real gunfire. Neither of these are professional films, okay? I made them quickly to illustrate the effect, so spare me the filming critiques. :)

Posted by Castigator at 9:34 PM