Theater of War: Campaigns made easy

Theater of War (hereafter referred to as TOW) is a Piquet campaign system written by Brent Oman. I wanted to write this review because the rules are really a gem and they don't seem to be well-known in the wargaming community. TOW is written with Piquet in mind, but could be easily adapted for any rule set. The small booklet contains 92 pages of tables and rules and the pack includes sample rosters, sequence cards, and maps. The rules can be used to play any historical campaign from Biblical Wars to the Vietnam War.

I've participated in many campaigns in my wargaming career and almost every one has started with a great deal of enthusiasm, but inevitably one campaign side killed the campaign by massing forces for a battle that were larger than the tabletop forces could represent. The campaigns would also generate battles that the players weren't interested in fighting on the tabletop. "Oh yeah, I'd love to defend with my 5,000 militia against your 40,000 regulars. Let's devote a weekend to that battle." TOW avoids both of these campaign-slayers.

First, you have to set the time scale and map scale for your campaign. Are you campaigning around Gettysburg in July 1863 or are you recreating the Eastern Theater in 1863? My intent is to use TOW to recreate Lee's 1862 Sharpsburg campaign. The map will have the Potomac as its southern border. It will be roughly divided by a north-south mountain range. The action will take place in Maryland and Pennsylvania.

The map can be divided up into map areas that are defined by terrain type as Light, Medium, and Heavy. Light areas cost less movement points, Heavy areas cost more movement points. Certain movement areas might be worth from 1 to 4 campaign(victory) points. In my campaign, Harper's Ferry is valuable and would be worth 4 points.

You next have to establish your campaign roster. This a roster of all the units that will be available to your side during the campaign. A formula allows you to calculate the campaign roster size based on the quality of your army's Piquet sequence deck and army list. You then compare the unit total from the formula with the army list from the appropriate Piquet supplement and fill out the roster.

Okay, so how does Little Mac get all these units onto the table?

Your armies are called Battle Groups(BG). BG's range in size from 1(smallest) to 4(biggest). Your BG's move around the campaign map according to how your campaign game plays out. The total sizes of your BG's depends on your historical period, Medieval can have a total of 6, ACW can have 8, Vietnam has 10. Basically, as your staffwork becomes more sophisticated, you can have more individual BG's running around on the map.

You have your map. You have your roster. Now you build your Campaign Sequence deck. If you have the Piquet supplements, your army Sequence decks convert directly into the Campaign deck. When you play a campaign turn, you roll a d20 vs your opponent's d20. The winner gains the Initiative and is able to use the die roll difference in Impetus to flip cards from the Campaign Sequence deck. (So, in my campaign example, the Confederates roll a 17 and the Union rolls a 12. The Confederates gain the Initiative and have 5 Impetus.)

Being McClellan (or Lee)

When two opposing BG's are in the same campaign movement area, and the Initiative player plays an Engage in Battle card, and burns an Impetus to initiate the battle, we now have a tabletop battle. Initiating a tabletop battle ends the Campaign turn. The Campaign turn also ends when a player runs through his entire Campaign Sequence deck or both players tie on their Initiative die rolls.

When a battle is started, both sides now play their Battle hands. The Battle cards I marked with an asterisk above are battle type cards. You can only play one kind of battle type card in battle, but you might have more than one of that kind in your Battle Hand. A table in the rulebook cross references the played battle type cards and dictates what type of battle will be wargamed: Attack vs Defend, Encounter, Flank vs Attack, etc. 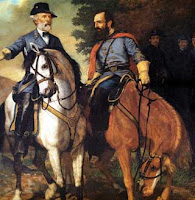 Once you play the cards from your Battle Hands, you can determine which side has the advantage based on better Battle cards and/or superior BG size. The advantage lets you flip more Army Characterization Deck(from basic Piquet) cards than your opponent to determine the size of your tabletop force. Generally the advantage will let you randomly draw more units than your opponent from your campaign roster. Some special cards also let you hand pick the best units instead of trusting the random draw.

The units selected from the campaign roster are entered into each player's battle roster. The units are formed into commands. TOW uses card draws from each army's Sequence Deck to establish the terrain on the battlefield modified by the campaign area in which the battle occurred (Light, Medium, or Heavy). The battlefield objectives are established using card draws from the same Sequence Decks. Some objectives award victory points. Some objectives confer morale bonuses on the owners.

Once the terrain and objectives are laid out on the table, it's time for each player to deploy their commands. Each player simultaneously flips cards from their Sequence Decks. The flipped cards dictate who deploys commands first and in which zones on the table they can be deployed.

When the troops are deployed onto the table, the combat begins. Based on your particular rule system, once the battlefield victor is determined, the level of victory is translated into consequences in the campaign game. There are three levels of victory: Crushing, Decisive, and Marginal. Losing battles make your BG's retreat on the campaign map and a percentage of the units in the losing BG's will suffer a downgrade in combat effectiveness in their next battle. Winning battles also moves you closer to victory in the campaign, right???....

So, how do you win the damn campaign?!?

Each side has National Will (NW). When your National Will reaches zero, you lose the campaign. Each battlefield loss costs your side a corresponding loss in NW. The level of victory, size of the losing BG, and value of the campaign map area where the loss occurred can all increase the cost in NW that a battle loss will inflict on the loser.

This is interesting because in my Sharpsburg campaign, I might leave AP Hill's Division in Harper's Ferry, hoping to score some Campaign Points, but if the Supply card doesn't come quickly I don't get to count those points. So, the Rebel player might leave old AP down there waiting for the points when he could really use his BG back with the main army. It becomes a race against time. Do I leave a BG down there to score the points or bring it back to fight the incoming Union troops? Sound familiar?

Theater of War lets you run a campaign, organize the armies, generate the battlefields, and keep track of victory. Like most Piquet-based systems, the sequence decks generate a lot of uncertainty about what the future holds for your little Battle Groups.

You might want your BG to move into the light terrain outside Frederick, Maryland, but until you get that Light Terrain Move card, it's not going to happen for you. Just like in real historical campaigns, your armies and subordinate generals don't always react right away to your orders and desires.

Do you concentrate on marching your armies to execute your masterplan or try to build up your hand to improve the Battle cards you have available in case Stonewall Jackson is lurking in ambush behind that mountain range? Is that Battle Group in front of you a screening force or the Army of the Potomac on the move?

Even if you're not a Piquet player, the cards supplied with the rules allow you to customize each campaign deck to reflect the strengths and weaknesses of the opposing forces. With some tweaking, TOW can be modified to give you an excellent campaign system.

If you are a Piquet player, the rules allow you to fight campaigns with any army from any Piquet supplement you own. This is a must-have for the Piquet library.

The production values are decent. Some of the type is a little small and you won't see any interior color pictures, but the book is jammed full of typo-free tables, charts, and rules. There are some black and white photos of nicely painted miniatures. The package includes sample battle maps, campaign maps, and sheets of Campaign Sequence cards you need to cut out to play with.

Theater of War is available for $30 from the Piquet website
Posted by Castigator at 7:04 PM