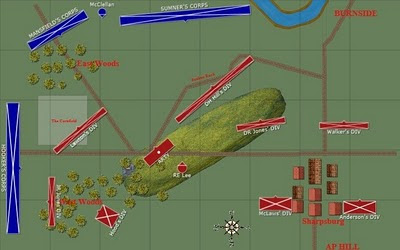 At this scale, units represent brigades and artillery battalions. The commands marked on the map are Confederate divisions and Union corps. The scenario lasts 10 turns. 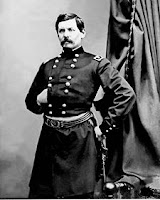 The Battle of Antietam was a battle where General McClellan's Army of the Potomac had a tremendous numerical advantage over the Army of Northern Virginia. McClellan squandered his advantages and attacked the Rebels without coordinating his corps. Any Antietam scenario needs to simulate the delays of Hooker's sister corps in coming to his support as well as the absence of Burnside's 9th corps for much of the battle.

Initially, Hooker has a significant numerical advantage near the West Woods. He is no slouch as a leader and his 1st Corps is very capable. The Confederate player should be biting his fingernails as he throws his available divisions against the 1st Corps tide as he tries to stem it. If Lee stops Hooker, there should be no time to breathe before those divisions then have to rush to stop the slow-starting Mansfield and Sumner in the center. Then the clock begins to count down to see if A.P. Hill will arrive in time to stop Burnside.

The Union army has the following troops divided among four corps and an off-board grand battery:
The Confederate army has the following troops divided among 9 divisions and 1 grand battery:
Total strengths are:
It's also important to note that designations like militia and regular don't describe the regular/volunteer status of the brigades. In Hallowed Ground, regular brigades are slightly better at melee than militia brigades. In this order of battle, the large proportion of Confederate regular brigades in the ANV reflects that most of the Confederate troops that followed Lee across the Potomac River were the battle-hardened veterans who were most committed to the Confederacy. Many of the Union troops were fresh with little combat experience. (Of course, this is Piquet, so your regular brigade might turn out to be Tired while the hopeless militia brigade next to those jaded vets rolls up as Determined and they fight like tigers!)

I determine the armament of my infantry units when I make the Troop Quality Check for each unit. I roll a d10 for each unit and if I roll a 6 or less (Confederates) or a 8 or less (Union) the unit is armed with rifled muskets.

The battle is a large battle and I recommend using two Sequence Decks per side. The Union forces should use two Abysmal decks and players can split the commands between themselves based on table location (maybe Hooker with one and Mansfield/Sumner using the other). The Confederate players should use two Superior decks. One deck should apply to Jackson's Corps in the West Woods and the other should apply to Longsteet's Corps near the Sunken Road and table area south of the West Woods. Divisions can switch from one corps to another for 1 Impetus on an Officer Check card as they are committed to battle.

The center ridge is a Class II hill for movement and LOS only and allows artillery to shoot over intervening units, but it is a gradual slope toward Sharpsburg and does not count as Class II terrain or superior/inferior position for melee or shooting.

The Sunken Road is Class II defensive terrain and superior position facing to the east only. The Sunken Road does not affect movement and offers no advantage whatsoever to the rear or flanks. The only section of the road that is treated as "sunken" is an area two brigades wide marked by the words "Sunken Road" on the map. The rest of the road is just a road with no combat effects.

Sharpsburg is a Class III town.

The Dunker church, and most roads have no effect on the game. You might want to give a road bonus to units moving in road column along the Hagerstown Turnpike. It runs from the south board edge to the north board edge.

Miller's Cornfield was in the north end of the battlefield and was a large field with tall corn. If you wanted, you could make the Cornfield on the north end of the table block LOS as if it was Class II woods, but it should have no other effect. Even that LOS effect is probably gone once a brigade has marched through it and trampled the corn.

The Confederates have to defend the following terrain objectives:
The historical battle led off with Hooker's morning attack on the Confederate left wing in the West Woods. 12th Corps and 2nd Corps start the battle with all units out of command. Both of these corps took a while to get into the fight and when they did fight, their attacks were disjointed and/or poorly led. 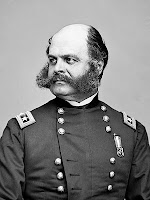 Burnside's 9th Corps is a special case. Burnside spent much of the morning stalled behind failed attempts to capture the bridge that now bears his name. Eventually, the 9th Corps discovered it could cross the Antietam Creek at other locations. How do you simulate these delays?

Robert E. Lee was also waiting for A.P. Hill's Division to arrive from Harper's Ferry. Hill is available on Turn 7. The Stratagem card is inserted into the Turn 7 Confederate Sequence Deck. After it is flipped, Hill's Light Division appears on the west board-edge marked with his name behind Sharpsburg after the Confederate player pays 4 impetus in any one Initiative.

NOTE: It is important to ensure that the Stratagem cards are in the Sequence Deck, so be sure to insert them AFTER you have removed cards and degraded the decks with additional Dress Lines cards.

Hill's Division arrives with its own supply of 10 morale chips. Burnside's Corps must be allocated morale chips at the beginning of the battle from the army supply like any other Union corps.

Amended 12/25/2010 (Changed impetus cost for Burnside's arrival to a sliding scale in order to make it possible for Burnside to actually arrive. :) )

Playtests: 3
Posted by Castigator at 2:18 PM