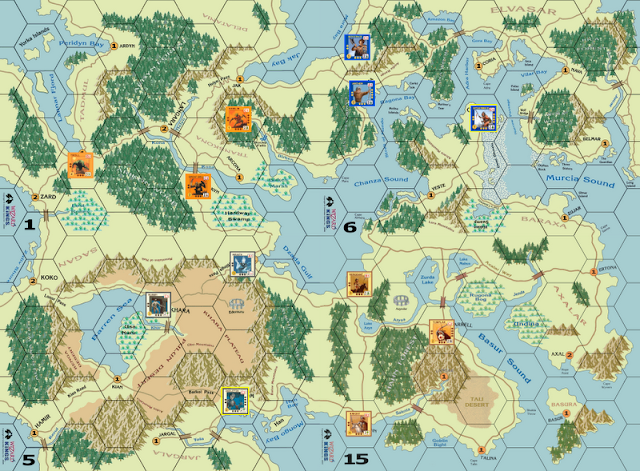 I used the Wizard Kings Vassal module to design an interesting map for a Hostile Realms fantasy campaign.  I've owned the Columbia Games' block game for some time and I always thought it would make a good fantasy campaign aid.  You can mix and match the map sheets to your heart's desire.

Each block represents a Battle Group.  There are 4 player kingdoms.  From lower left clockwise, they are: Undead, Goblins, Gonfor, and the Middle Kingdom.  I imagine we could play on Skype and. I could move the blocks according to the players' orders while they watched online.  I think the module only handles 2 players, but unlimited observers.

Castle blocks will mark controlled cities.  Occupation of cities scores points for the players.  Supply depots can be built in cities.

The players will know what Battle Group strength their blocks are.  For example, the Goblin player secretly knows his Orc block is Size 3, his Goblin block is Size 2, and his Troll block is Size 1.